Slamming liquid impact and the mediating role of air

Due to the COVID-19 crisis measures the PhD defence of Utkarsh Jain will take place online without the presence of an audience.

Utkarsh Jain is a PhD student in the research group Physics of Fluids (POF). His supervisor is prof.dr. R.M. van der Meer from the Faculty of Science and Technology. 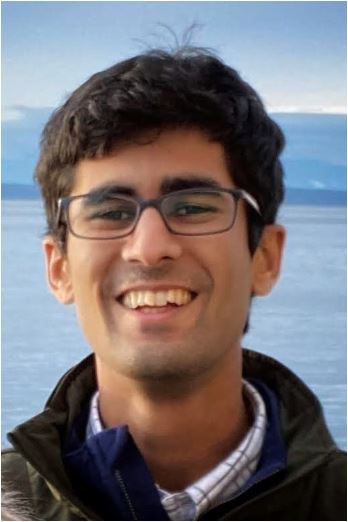 The slamming of a liquid against another phase is a common sight in nature. It can vary in intensity from being relatively soft and harmless such as during raindrops impacting on soil or insects. On the other hand, it can be particularly violent and dangerous in instances of waves impacting on solid structures, such as those found in offshore settings, and in the transport of liquid cargo.

It is an important concern to predict the intensity of impact reliably, for it has a direct bearing on the damage that is caused to a solid structure. The forces generated upon impact are an indicator of the intensity of impact. However, given an ambient condition, the interaction between the liquid phase and its surroundings plays an important role in influencing the shape of the liquid surface prior to, and during the impact. Consequently, the ambient conditions have an important, but often unclear influence on the slamming pressures generated.

In this thesis we studied the role of air in a liquid-slamming event by means of experiments. The geometry of the problem was simplified to keeping the liquid phase (water) stationary in a bath, while it was impacted upon by a flat, horizontal disc approaching at well controlled constant speeds. A new technique to visualise the free surface of water before impact was developed. It was shown that due to flow of the intervening air layer, the water surface 'feels' the approach of a disc well before it makes first contact with the water. The movements of the water surface due to the action of this intervening air layer were accurately measured and shown to be reasonably well reproduced by simulations and theoretical calculations.

Next, it was shown that an air film is momentarily trapped on the disc after impact. The presence of an air film causes different impact pressures to be experienced at different locations on the disc. To corroborate the pressure measurements, the total force on the disc was also measured. It was shown that mere peak pressures and forces are very susceptible to being underestimated due to insufficient temporal resolution of the equipment. However, the time-integrated loading, the so-called pressure (or force) impulse due to impact, could be reproduced very well. In addition, it was shown that the growth of impact impulse is an inertial process, which makes it all the more reliable as an indicator of slamming intensity.

The role of ambient air becomes negligible when it is allowed to escape, for instance, by having an impactor with a non-zero deadrise angle. There exists the canonical model by Wagner (1932) to calculate the impact pressures on water-impacting wedge-like objects. The original treatment yields singularly high pressures at any given point on the wedge, which were regularised using asymptotic matching by, e.g., Zhao & Faltinsen (1993). However the model calculations were still found to be consistently larger than measurements, and vary along the wedge’s surface. We showed that the disagreement between the model and measurements arises due to a spatially-averaged pressure being measured in experiments. The model is thus used to compute spatially-averaged pressures, and shown to anticipate the measurements excellently. We suspect our work to be the most rigorous test to date of the assumptions that go into Wagner-like models, and of the results that they produce.

Subsequently, we put a spin on the behaviour of intervening air layer in between a disc and a water surface: instead of merely squeezing it out of the gap, its flow was modulated by shaking the disc with a prescribed frequency and wavelength. The resulting air flow excites standing waves on water surface under the disc. The standing waves transform into travelling surface waves in the absence of forcing from the air. The system is a resonator with forced oscillations, however, one that leaks energy into its surroundings. The dissipative nature of resonating waves can be likened to how a stringed instrument with an air cavity, such as a guitar, creates and emits acoustic waves. The experimental situation was analytically modelled by approximating the air flow as lubrication flow, that excites waves on the water surface via a sloshing-like imposition of time-periodic pressure condition.

Finally, liquid impacts were studied where both the projectile and target phases were liquid. The projectile drops were of silicone oil, while the target was a water pool. The properties of the projectile drop were varied by using silicone oils with different viscosities. It was shown that despite the drop containing a very viscous oil, the early growth of the crater in the water pool was still a process driven by the drop’s inertia. However in later stages, an enhanced dissipation in the drop liquid resulted in clear slowing-down of the dynamics of the crater.

In summary, in a typical liquid slamming event, the ambient fluid plays an important role in deforming the liquid interface during all stages of the impact process. Liquid slamming events are associated with the generation of large forces upon impact. The trapped fluid plays an important role in influencing these forces. The role of this trapped fluid, both before and after impact, was elucidated in different scenarios by performing geometrically simplified experiments. It was shown that the flow of trapped ambient fluid can, at least in principle, be manipulated to potentially influence the loads as desired.

Due to the COVID-19 crisis measures the PhD defence of Utkarsh Jain will take place online without the presence of an audience.