Lisanne de Boer is a PhD student in the Nanobiophysics group. Her supervisor is prof.dr. T.J.M. Ruers from the Faculty of Science and Technology (also Antoni van Leeuwenhoek Ziekenhuis / Dutch Cancer Institute). 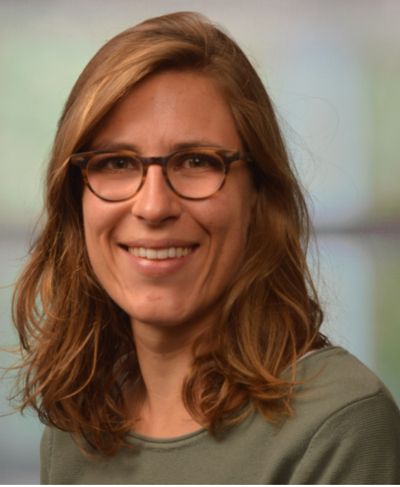 Diffuse reflectance spectroscopy (DRS) is an optical technology that is based on the absorption and scattering characteristics of the tissue. A DRS measurement will contain information regarding the composition and morphology of the tissue, which can be used to discriminate different tissue types. With the ability to measure the optical characteristics of tissue, DRS is a potential candidate to use for margin assessment during breast-conserving surgery and thereby guide the surgeon towards an optimal resection. The goal of this thesis was to address some of the challenges that hamper the translation of this optical technology to the clinic.

Chapter 2 reviews the current position of optical spectroscopy as a technology that has proven to be able to discriminate different tissue types, but has not reached broad clinical acceptance yet. Some of the key challenges faced by translational researchers are presented and addressed. This chapter does not only concern the application of DRS for margin assessment during surgery, but the more general use of spectroscopic tissue sensing. In this chapter also an outlook is proposed on how translational researchers could proceed to succeed in implementing optical technologies for clinical decision making.

Chapter 3 involves the first measurements that were performed on ex vivo breast tissue specimens at the pathology department. Measurements were acquired of healthy tissue, tissue at the border of the tumor, and tumor tissue. After measuring, once the microscopy section of the tissue was available, a simple registration between the optical measurements and the H&E (hematoxylin and eosin stain) microscopy section was made to be able to confirm that measurements indeed were taken from healthy tissue, tumor tissue, or at the border of the two. The optical measurements were quantified with an analytical fitmodel that is based on the diffusion theory to extract the fit parameters from the measured spectra.

Chapter 4 reports on how the change in physiology due to resection of the tissue (in vivo versus ex vivo) may impact DRS measurements, as well as the influence of inter-patient variation. This chapter elaborates on if these factors hamper the use of optical spectroscopy for the detection of tumor tissue and if normalization of the measurements using the patient as its own reference can improve the accuracy.

In this study measurements of both tumor tissue and normal tissue were acquired in 45 patients before (in vivo) and after resection (ex vivo) of the specimen using a fiber-optic needle. To confirm the needle had been correctly placed in either healthy tissue or tumor tissue during the measurements in the first half of the study a twistmarker was left behind at the measurement location which allowed the pathologist to sample and evaluate the tissue around the measurement location. In the second half of the study, a biopsy was taken with a separate biopsy needle after the DRS measurements were acquired, which was then assessed by the pathologist. Similar to the previous ex vivo study the measurements were quantified with the analytical fit model to extract the fit parameters from the DRS spectra. The analysis with the fit parameters was performed with a Generalized Estimating Equation (GEE) model which is a statistical test that allows taking into account relations between individual measurements when assessing the association between a variable (e.g. a fitparameter) and a covariate (e.g. tissue type ‘healthy’ or ‘tumor’). Besides, the tissue type (‘healthy’ or ‘tumor’) and tissue status (‘in vivo’ or ‘ex vivo’), patient characteristics such as menopausal status (‘pre-/perimenopausal’ or ‘post menopausal’) and treatment with chemotherapy or hormonal therapy prior to surgery (‘yes’ or ‘no’) were also included in the analysis as a covariate to be able to assess the influence of inter-patient variation.

It was found that some of the assessed fit parameters were significantly different in healthy tissue and tumor tissue (F/W-ratio, β-carotene (μM), blood (%), reduced scattering at 800nm, and fraction Mie scattering). Again the F/W-ratio provided the best discrimination between normal and tumor tissue for both the in vivo as well as the ex vivo measurements. None of the fit parameters was significantly affected by the moment at which measurements were acquired (‘in vivo’ or ‘ex vivo’). Furthermore, comparing the results of the F/W-ratio for the in vivo measurements with the results in the ex vivo measurements no difference in performance was found.

As for the menopausal status, no effect on any of the fit parameters was found, neither was there an effect of neoadjuvant chemotherapy although the number of patients which received chemotherapy prior to surgery was limited.

In an attempt to limit the influence of inter-patient variation the fit parameter data were normalized by using the normal measurements of a patient as a reference. However, this did not improve the discriminative power of the optical fit parameters in distinguishing healthy tissue from tumor tissue.

In Chapter 5 the focus is on how to accurately correlate the optical measurements acquired ex vivo with the histopathology of the microscopy section (H&E). The validation of optical technology with this current golden standard is very important but difficult. Processing of the tissue at the pathology department causes deformations in the tissue that can hinder the labeling of the optical measurements with the correct tissue type. Incorrect labeling can lead to inaccurate assessment of the performance of the technology. In this chapter, we present a method that accounts for the deformation of the tissue during pathology processing, and subsequently compare this method (affine + deformable registration) with another registration method (only affine registration) in which no correction for the tissue deformations is applied. The H&E section with correction for tissue deformation and the H&E section without correction for the tissue deformations are both evaluated by comparing the shape and composition of the tissue with an in independent modality (micro-computer tomography).

With an increasing number of patients receiving chemotherapy prior to their surgery, it is important to research how this might affect the optical measurements. If optical characteristics of tissue alter due to the pre-operative treatment this could hamper the use of DRS for margin assessment in patients that were treated with this neoadjuvant chemotherapy. The previous analysis regarding this topic was performed with a dataset of a limited number of patients (Chapter 4). In the analysis in Chapter 6, a large number of patients was included (n = 92). Again a GEE model is used for analysis, but this time datasets are constructed of measurements with similar histopathology (i.e. datasets of ‘fat’, ’connective’, ’connective tissue combined with fat’, and ’tumor cells combined with connective’). Besides the pre-operative treatment with chemotherapy also menopausal status was included as a covariate in the models. For the datasets with a mixture of tissue types (‘connective combined with fat’ and ‘connective combined with tumor cells’) the percentage connective tissue was also added as a covariate.

The analysis was performed with both the intensities measured at each wavelength between 850 and 1600nm as well as the fit parameters derived from the spectra. None of the wavelengths had a significantly different intensity measured in the patients with and without chemotherapy in any of the four datasets. These results were confirmed by the analysis of the fit parameters. The fit parameters were not affected by neoadjuvant chemotherapy, except for the fit parameter (collagen) which showed a significant difference in only one dataset that was comprised of measurements of tumor cells in combination with connective tissue. Regarding the influence of the menopausal status, the influence was considered negligible, as similar to the results of neoadjuvant chemotherapy, none of the wavelengths was significant for any of the datasets between the two menopausal status groups. And again, only the collagen fit parameter was significant in the dataset comprised of measurements of tumor cells with connective tissue.

In Chapter 7 two challenges that might influence the ability of DRS technology to detect positive resection margins are addressed. The first challenge considers the detection of ductal carcinoma in situ (DCIS) which can be a precursor of invasive carcinoma. Being able to also identify areas of DCIS is important as this type of malignancy accounts for the majority of positive resection margins. The second challenge involves the accurate classification of locations that are a mixture of tissue types. Breast tissue is inhomogeneous in the sense that healthy tissue predominantly consists of fat tissue, but there can be connective tissue present as well. Meanwhile, connective tissue is also present in breast cancer tumors, which comprise of tumor cells surrounded by connective tissue in various ratios. Additionally, in the measurements that are acquired at the resection margin tumor cells with accompanied connective tissue might be surrounded by fat tissue. For successful resection margin assessment, it is important to consider if measurement locations with a mixture of tissue types can be classified accurately.

To research both these questions, DRS measurements were obtained from 107 ex vivo breast surgery specimens. The optical measurements were correlated with histopathology using the registration method that accounts for tissue deformation which was presented in Chapter 5. Furthermore, instead of using the fit parameters or the intensities measured at each wavelength, so-called spectral features were derived from the spectra and used in the analysis. The spectral features described slopes and dips form specific wavelength ranges in the spectrum.

In chapter 8, the results of an in vivo study are presented. DRS technology was applied in the clinical workflow during routine breast biopsy procedures. An optical biopsy needle was used that allowed to perform the optical measurements and subsequently, using the same needle, take a biopsy of the tissue that was measured. In 27 patients that underwent an ultrasound-guided breast biopsy procedure optical measurements were acquired from a location at a distance from the suspect lesion and from a location in the lesion. Additionally, in five patients measurements were obtained continuously along the entire biopsy needle trajectory.

Subsequently, classification models were developed to classify the DRS measurements as normal or healthy. The models were based either on the fit parameter data, or the full DRS spectrum, or a subset of wavelengths from the spectrum. The wavelengths were selected by choosing one wavelength with the lowest p-value from wavelength ranges that were significantly different in the spectra from healthy tissue compared to the spectra of tumor tissue. The performance of the classification model that was based on these selected wavelengths demonstrated the best performance.

The continuous measurements of the needle trajectory showed the transition from healthy tissue to tumor tissue. These measurements were classified with the classification models and results showed that in four out of five patients the output of the model based on a selection of wavelengths was in agreement with the pathological outcome. In one patient the output of the classification models indicated normal tissue whereas the biopsy specimen did contain tumor tissue. However, since the specimen was fragmented this might have hampered correct correlation with the tissue volume that was actually measured.

Lisanne de Boer is a PhD student in the Nanobiophysics group. Her supervisor is prof.dr. T.J.M. Ruers from the Faculty of Science and Technology (also Antoni van Leeuwenhoek Ziekenhuis / Dutch Cancer Institute).