Johan Reinink is a PhD student in the research group XUV Optics. His supervisor is prof.dr. F. Bijkerk from the Faculty of Science and Technology. 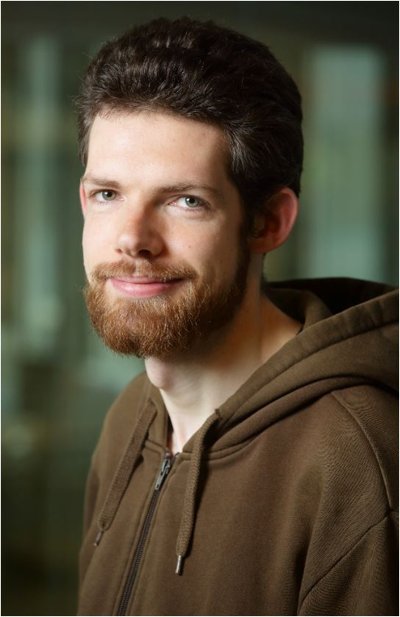 The research described in this thesis has been aimed to improve the understanding of thin film growth by analysing the growth stress in highest, i.e. atomic level detail. This is done by in-situ stress measurement of the growth of, primarily, nanoscale Mo/Si layer systems and relating the data to in-situ X-Ray Diffraction (XRD) and ex-situ Low-Energy Ion Scattering (LEIS) measurements. Physical processes, such as compound formation, phase transitions and diffusion could thus be observed. The stresses that originate from these effects typically act at length scales from the interatomic distance to several nanometer (typically corresponding to the layer thickness or lateral grain size in the films). As these effects occur uniformly over the full surface of the thin film (provided the substrate and deposition process are homogeneous), a macroscopic force develops which acts on the substrate, inducing a measurable curvature in thin substrates.

So far, measuring growth stresses accurately during deposition has been challenging due to the ultrahigh vacuum conditions required as well as the presence of electrical interference from the plasma of the sputter process. For this reason, a setup was developed that continuously measures the curvature of a cantilever during layer growth, from which the intrinsic stress of the deposited layer was calculated. The measurement is done optically to avoid electrical interference. A self-contained, in-vacuum, in-situ thin film stress measurement tool was developed. This tool records the intrinsic stress with a low noise level of 0.01 N/m RMS, sufficiently sensitive to capture features such as the transition of Mo from an amorphous to a poly-crystalline phase. The measurement range was over 600 N/m and likely limited by the mechanical limit of the cantilever curvature or non-linearities in the stress-curvature relation (Stoney equation). The tool was controlled wirelessly when inside the deposition setup with a live view of the stress evolution during deposition.

In order to better understand the development of growth stresses in Mo/Si systems, the stress measurements were correlated with LEIS measurements. The combined analysis allowed an accurate understanding of the interface formation occuring and its effect on the stress development. A tensile peak in the first 0.15 nm was observed, corresponding to a (fast saturating) process suggested to be related to grain boundary filling. After this initial tensile growth stage, a compressive growth was observed. This compressive stress was related to silicide interface formation, a process reducing with the amount of Mo available at the surface, as evidenced by LEIS data. Furthermore, the LEIS data during this growth stage showed a surface density that was much higher than a mixed coverage of Mo and Si, with further evidence of interface compound formation playing an important role in the development of stress. At 1.5 nm layer thickness, the bulk Si growth started, shown by LEIS as the closing of the Si layer and by a constant stress of 1.1 GPa, mainly due to peening from energetic Si atoms.

The Mo-on-Si stress development showed a strong tensile stress due to interface formation, likely due to defects created in the Si surface upon MoSi2 formation. The LEIS measurements indicated a larger intermixing, shown by surface atomic densities of Mo and Si being higher than expected from a mixed coverage of Mo and Si and resulting in an interface width more than twice as large as in the case of Si-on-Mo. The phase transition of Mo was clearly observable in the stress development by a tensile step of 0.7 N/m at 2.1 nm of Mo deposited.

The Mo-on-Si interface was modified by using C and Ru interlayers in order to understand the effect of substrate layers (in particular the effect of diffusion of substrate atoms into Mo) on the stress development of Mo growth. Even a 0.1 nm C layer, equivalent to less than a monolayer, had a strong impact on the Mo stress development, likely due to the high diffusivity of C in Mo. Ru on the other hand had a low diffusivity in Mo and, similar to Mo, formed a silicide with the a-Si substrate layer. Due to the similar physical properties of Ru and Mo, the Ru interlayer acted as a template for the Mo layer. This was concluded from the fact that the Mo-on-Ru-on-aSi stress development was equal to the Mo stress development at a later stage, corresponding to a continued growth of Mo-on-Mo. Due to this templating effect, the Mo phase transition occured earlier, whereas for the C interlayer it was postponed due to C diffusing into the Mo. Both C and Ru reduced the Mo/Si intermixing and reduced the initial tensile stress of the Mo growth associated with the silicide formation.

The following should contain more conclusions and not just observations:

It has long been recognized that the film structure and stress development of Mo do not only depend on the substrate layer it is deposited on, but also on the growth conditions, and in particular on the deposition pressure. The dependence of the crystalline structure of Mo on the pressure during deposition was studied using in-situ XRD. With increasing sputter gas pressure the amorphous to poly-crystalline phase transition was delayed and the back crystallization became only partial or absent. For the low pressure deposition the roughness was the lowest and Laue fringes were visible after the phase transition.

The phase transition of Mo was analyzed in more detail by performing a 2 component fit. In this approach the diffraction peak is fitted by a linear combination of either two Guassian or two pseudo-Voigt curves to separate the amorphous and poly-crystalline contributions during the transition. The width of the diffraction peak corresponding to the poly-crystalline contribution was analysed using Scherrer's equation. It indicated an out-of-plane crystallite size nearly equal to the deposited thickness during the complete transition, indicating that the crystallite growth is in-plane. These measurement can further lead to a better understanding of the Mo phase transition kinetics.

Johan Reinink is a PhD student in the research group XUV Optics. His supervisor is prof.dr. F. Bijkerk from the Faculty of Science and Technology.