Marjanne den Braber-Ymker is a PhD student in the research group Clinical Neurophysiology (CNPH). Her supervisors are prof.dr.ir. M.J.A.M. van Putten from the faculty of Science and Technology (TNW) and prof.dr. I.D. Nagtegaal from the Radboud University Nijmegen. 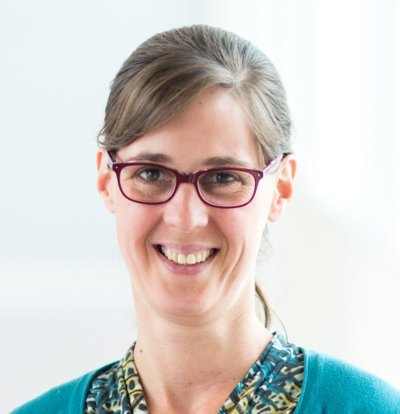 Intestinal motility is regulated by the enteric nervous system (ENS), the interstitial cells of Cajal (ICCs) and the smooth muscle cells of the muscularis propria. Changes in one or more of these structures can lead to disruption of intestinal motility, summarised in the term gastrointestinal neuromuscular disease (GINMD). The term GINMD includes a clinical heterogeneous group of both primary motility disorders, in which the intestinal neuromuscular system is primarily affected (e.g. Hirschsprung's disease or chronic intestinal pseudo-obstruction), and secondary motility disorders, which are the result of a systemic disease (e.g. systemic sclerosis or amyloidosis). Primary GINMDs such as chronic intestinal pseudo-obstruction or slow transit constipation show a large individual variation, resulting in a broad spectrum of histological characteristics in the bowel. This makes it impossible to distinguish one general underlying pathophysiologic mechanism. The aetiology of secondary GINMDs is generally better understood, but the histopathological features are often not systematically studied.

In this thesis, the histological background of the pathophysiology of secondary motility disorders with a clear aetiology (spinal cord damage, amyloidosis and systemic sclerosis) is investigated to understand possible mechanisms of intestinal motility disorders.

The myenteric network of ICCs may have an important role in peristalsis and propagates slow waves to smooth muscle cells. Loss of ICCs may therefore result in intestinal dysmotility. The International Working Group on GINMD suggested in their guidelines the importance of histological assessment of ICCs in the bowel for diagnosing patients with GINMD. Reporting a decrease in ICC number of more than 50% might be useful in diagnostic workup, according to quantitative methods. However, the quantitative methods described in literature are not practical for the daily routine of the pathologist. Therefore, we presented a straightforward semiquantitative estimation method for myenteric ICCs of the bowel (chapter 1). In this study, two control groups and four groups composed of patients with gastrointestinal motility disorders were created. The proposed estimation method for the myenteric ICC network generally showed good interobserver and intra-observer agreement and reliability. More myenteric ICCs were found in the small bowel than in the colon. No significant differences between colonic regions were shown, nor were there any differences in the orientation of the sections. Since this method is semiquantitative, simple and capable to differentiate between normal and diseased tissue, it can be used in routine diagnostics of gastrointestinal neuromuscular disorders.

Besides the ICC network, other neuromuscular structures were semiquantitatively evaluated in this thesis using different immunohistochemical stains, including the number of neurons, the density of the nerve fibre network (glial cells), and smooth muscle filament proteins (chapter 2). These semiquantitative methods were used in the studies presented in chapters 3 to 5.

Spina bifida and spinal cord injury are both diseases with a dysfunctional spinal cord, resulting in interruption of the extrinsic nerve fibres of bowel innervation. Extrinsic modulation of the regulation of enteric motility by the ENS is needed for adequate bowel activity. Therefore, damaged extrinsic input results in enteric dysmotility. In the colon, two main types of dysfunction can be distinguished, dependent on the level of the lesion: an upper motor neuron syndrome and a lower motor neuron syndrome. Both syndromes result in constipation. In chapter 3, we studied colon samples from gut resections and could distinguish between a group with severe motility disorders (as indication for surgery), and a group with mild or without motility disorders (other indications for surgery, unavailable information about dysmotility related symptoms).

The disruption of extrinsic innervation of the intestines, due to spinal cord damage, results in disturbance of modulation of the intrinsic reflexes of the ENS. Therefore, we expected changes in the ENS, specifically alterations in the distribution of neurons and/or glial cells. Our study showed a reduction of the myenteric ICC network in almost all spina bifida and spinal cord injury patients, but a reduction of neuronal density in approximately two thirds of the patients with ICC loss. Therefore, the ICC network may be the first structure of the neuromuscular apparatus that becomes affected by damaged extrinsic innervation. Reduction of ICCs may precede loss of neurons and glial cells in the myenteric plexus. Interestingly, enteric glia were significantly decreased in patients with severe motility problems, indicating that glial cells play a significant role in the regulation of motility, as described in literature. No differences could be found between spina bifida (congenital disease) and spinal cord injury (acquired disease) patients, suggesting that changes in the neuromuscular apparatus are reactive to disrupted extrinsic innervation regardless of the aetiology of the lesions.

Amyloidosis includes a diverse group of disorders characterised by extracellular abnormal fibrillar deposits in various tissues. In chapter 4, we studied gut samples from patients with AL and AA amyloidosis, the two most common types of amyloidosis. AL amyloidosis is associated with plasma cell dyscrasias, producing increased immunoglobulin light chain amyloid fibrils. The underlying diseases of AA amyloidosis are chronic inflammatory or infectious disorders (i.e. rheumatoid arthritis and Crohn’s disease), resulting in abnormal levels of serum amyloid A, which is an acute-phase reactant protein produced by the liver. In both AL and AA amyloidosis, insoluble amyloid proteins can be deposited in several internal organs including the GI tract.

It has been suggested that different mechanisms are responsible for intestinal pseudo-obstruction in those patients: an enteric myopathy in AL and a neuropathy in AA amyloidosis. Furthermore, amyloid deposits are frequently found in the vascular walls, which may lead to ischaemia and further damage of neuromuscular structures in the gut wall. We therefore expected muscular changes in AL amyloidosis, neuronal changes in AA amyloidosis, and vascular involvement in both types of amyloidosis. In the mucosa, amyloid deposits were present in AA but absent in AL patients. Deposition of amyloid was present in the vascular walls of all patients as was expected. We found no differences between the AL and AA amyloidosis groups in the muscle layers and nerve plexuses of the bowel wall. Based on our histological findings, we proposed an alternative hypothesis about intestinal dysmotility in amyloidosis. First, amyloid is deposited in blood vessel walls. Second, amyloid deposition extends into the muscularis propria. Third, this may affect the myenteric ICC network leading to ICC loss. Finally, the myenteric plexus may become involved, possibly resulting in clinical symptoms of severe dysmotility (e.g. pseudo-obstruction).

In chapter 5, we investigated histological features of hypomotility in systemic sclerosis (SSc). SSc is a complex connective tissue disease caused by unknown environmental factors resulting in accumulation of collagen in the skin and visceral organs, including the GI tract. Although the exact mechanisms are still unclear, several processes play a role in the pathogenesis of SSc: an abnormal immune system leads to production of autoantibodies and autoimmunity, microvasculopathy, and fibroblast dysfunction resulting in excessive fibrosis. Involvement of the intestines can lead to hypomotility. Processes involved in the intestinal pathogenesis are microvascular damage, dysfunction of autonomic nerves, muscular atrophy and fibrosis, and autoantibodies, although it is currently not clear how these mechanisms interact. Microvascular damage and ischaemia have been suggested as the primary event in intestinal involvement.

It has been postulated that development of intestinal dysmotility may be a sequential process, starting with vascular changes, leading to neuronal damage, atrophy of the muscularis propria, followed by fibrosis. Hence, we expected in tissue material from SSc patients with fibrosis in the muscularis propria (the end-stage of the process of intestinal dysmotility) that vascular changes and neuronal damage could be observed as well. Our results could only partly confirm this, indicating that several parallel instead of sequential mechanisms may occur, resulting in large variation of morphological characteristics between individual patients. The diverse histological characteristics between patients may explain the variety of clinical intestinal symptoms in patients with SSc. The key finding of our histological study into SSc was the presence of fibrosis in blood vessel walls and in the muscularis propria, especially in the circular layer of the muscularis propria. In small bowel sections of SSc patients with severe intestinal dysmotility complaints, we did not find an association with histological changes of the neuromusculature. In the colon, reduction of the ENS may explain the symptoms of severe colonic dysmotility in some patients.

Finally, the results and conclusions of this thesis are discussed in a broader perspective. The two most striking findings in our studies on secondary motility disorders are a decreased density of the myenteric ICC network and a reduced density of glial cells in a large part of our patient cohorts. By limiting ourselves to well-defined secondary motility disorders, we have aimed for groups that are as uniform as possible, in contrast to the heterogeneous group of primary GINMDs. The study into specific diseases has provided new insights and hypotheses within the field of GINMDs. The surprising heterogeneity within our patient cohorts makes it difficult to derive general pathophysiological mechanisms for (primary) intestinal motility disorders. Therefore, it remains important to assess the neuromuscular structures in the gut of each individual patient with severe clinical motility complaints. A careful histopathological diagnosis will ultimately contribute to an accurate diagnosis, a better prognosis and appropriate (targeted) therapy for the patient.

Marjanne den Braber-Ymker is a PhD student in the research group Clinical Neurophysiology (CNPH). Her supervisors are prof.dr.ir. M.J.A.M. van Putten from the faculty of Science and Technology (TNW) and prof.dr. I.D. Nagtegaal from the Radboud University Nijmegen.