There is a growing need for miniature cryogenic coolers for cooling a wide variety of electronic devices, including low-noise amplifiers (LNAs), optical detectors and semiconducting and superconducting circuits. For these applications, the cooler should be small, low cost, low interference and have a very long life-time. Joule-Thomson (JT) coolers are excellent for this, because they do not contain moving parts and therefore can be scaled to very small sizes. When combined with a sorption compressor, a closed-cycle cooler without containing moving parts can be obtained. Such a cooling system is virtually vibration-free and potentially has a long life-time. 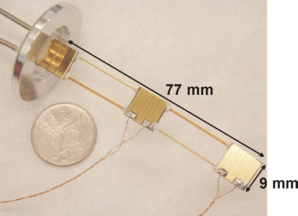 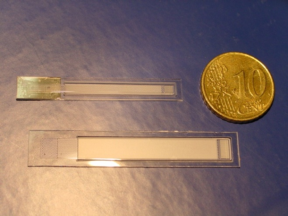 At the University of Twente, the miniaturization of Joule-Thomson (JT) coolers is investigated since 1995. Burger et al. started with exploring the possibility to fabricate JT cooler parts by means of micro-electro-mechanical-systems (MEMS) technology. They combined a miniature JT cold stage with a sorption compressor and in that way produced a closed-cycle cooler system. The cold stage consisted of a tube-in-tube heat exchanger made of glass capillaries glued to a micromachined silicon evaporator volume (Fig. ). The cooler was operated with ethylene and delivered a cooling capacity of 200 mW at 170 K, while it was precooled to 238 K with a thermoelectric cooler.

In a follow-up project, Lerou et al. successfully developed and tested micromachined JT cold stages that were fabricated by MEMS-technology only (see figure above). These cold stages consisted of a stack of three glass wafers. The high and low-pressure lines were placed on top of one another; etched in the top and middle wafer as rectangular channels with supporting pillars. A highly reflective thin layer of gold was sputtered on the outer surface to minimize the parasitic heat loss due to radiation. Operated with nitrogen gas, net cooling powers of 10 to 20 mW at 100 K were obtained. The cold stages were optimized for maximum performance in combination with minimum size by minimizing the entropy generation. The smallest cold stage had dimensions of 30.0 x 2.2 x 0.7 mm3.

At present, two follow-up projects are running. In the first project, two-stage JT cold stages are under development that are able to reach temperatures of about 30 K. Furthermore, a vibration-free microcooler system will be built and tested consisting of a JT cold stage integrated with a sorption compressor. Also, the fabrication of a small vacuum chamber with a long life-time (about 5 years) is investigated as well as the prevention of clogging of these microcoolers due to the deposition of small amounts of water vapor. In a utilization pilot, a demonstrator cooling system will be made that cools a low-noise amplifier to about 100 K for the Square Kilometer Array (SKA) project. 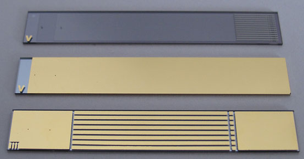 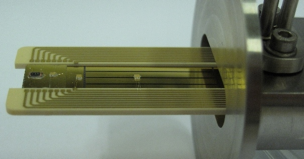 A microcooler mounted in a flange for characterization measurements.