This research is financially supported by the European Space Agency (ESA)

We are developing a sorption cooler for the European Space Agency (ESA). The cooler is designed for the Darwin, but is very attractive to other space and on-ground applications as well. After a first Technology Research Project (TRP) in the period 2003 to 2006, we are now working on a follow-up project that started in 2008.

Sorption coolers have no moving parts, apart from some passive check valves. This is attractive for a number of reasons. First, wear is not an issue and, therefore, extremely long life can be expected. Second, in contrast to mechanical piston compressors, no vibrations are generated. This is relevant to vibration-sensitive devices, such as optical detectors. Finally, the absence of moving parts permits scaling of the cooler to small size. This is especially of interest, because the efficiency of the cooler is fundamentally independent of its size. 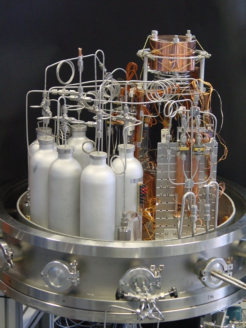 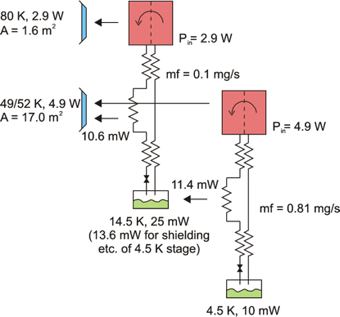 In the sorption cooler, a temperature of 4.5 K is established in two steps (see figure below). First, a sorption cooler operating with hydrogen gas realizes a temperature of 14.5 K. A second sorption cooler operating with helium gas is precooled by this hydrogen stage, and is able to reach 4.5 K. Both coolers have two-stage compressors, each with two times two compressor cells. Cooling is obtained via the Joule-Thomson effect. The hydrogen compressor is thermally linked to an 80 K radiator heat sink. The hydrogen gas is precooled by a 50 K radiator that also serves as the heat sink for the helium compressor. In the first ESA-TRP project the helium stage was realized and successfully tested. In the on-ground tests the temperature levels of 14.5 K and 50 K were realized with a two-stage mechanical cooler available in the lab. The objective of the new ESA-TRP is to realize and test the hydrogen stage as well. In further future, both stages will be combined.