Electron tomography at cryogenic temperatures (cryo-ET) offers the possibility to structurally characterize biological macromolecules and macromolecular assemblies in their native environment. By using sub-tomogram averaging, three-dimensional reconstructions at near-atomic resolution can be obtained [1]. A typical workflow of current cryo-ET approaches is illustrated below.

In the first step, the sample is vitrified in liquid ethane. This guarantees that the structure of the biological sample is preserved [figure 1.1, 2, 3]. In case the region of interest is difficult to identify, cryo-light microscopy is applied [figure 1.2, 4]. Since many biological samples are too thick to be penetrated by the electron beam, the sample material is then thinned by a focused ion beam [figure 1.3, 5]. Finally, cryo-ET tilt series are acquired of the thinned regions, called lamellae [figure 1.4, 6].

The entire workflow involves numerous handling steps, most of which under cryogenic conditions and in an anhydrous environment to avoid de-vitrification or contamination of the sample material. Due to the enormous complexity, only a small number of labs have so far established this technique worldwide.

Here, I will describe the current state-of-the-art workflow, and discuss open issues and necessary improvements to make cryo-ET accessible for many users in the near future. 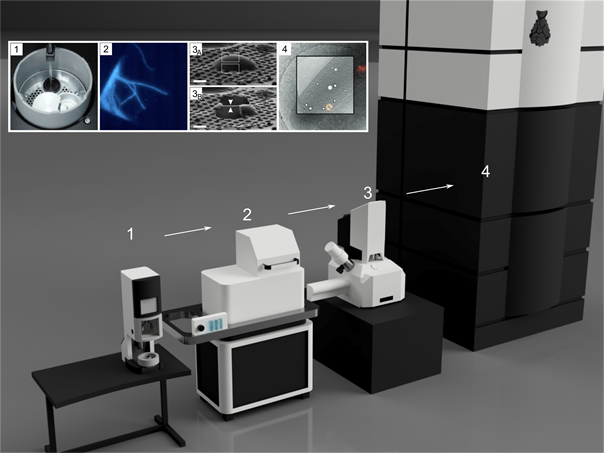 Go back to overview
Close
Suggestions