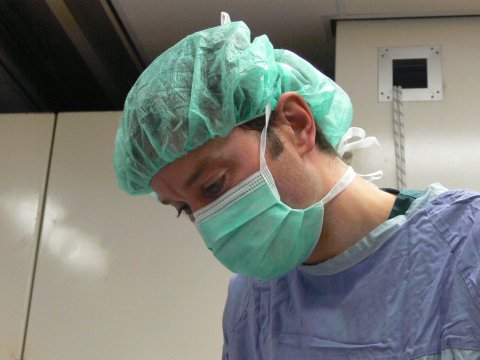 Nicolas Vos lives in the Jordan (Amsterdam) and has been a Veterinary Surgeon since 1999. His main focus has been performing surgeries. His student years where spend at the Veterinary University of Utrecht, after which an Internship was done at the now called Newmarket Equine Hospital; a Thoroughbred racehorse practice in the United Kingdom. In an area where approximately 30.000 racehorses where taken care of he mastered the ins and outs of Equine Medicine and Surgery. Amongst his tutors where the famous Dr Davis Ellis and Dr Ian Wright.

His Residency in Surgery followed with the help of Dr Dirk Riemersma at his Equine Practice in Germany (orthopedics) and Professor von Plocki took care of the Soft Tissue Surgical lessons at his practice in Baden Baden, Germany. Externships at several American Universities (Prof Norm Ducharme, Cornell University, Prof Dean Richardson, New Bolton Center) and Switzerland (Prof Walter Bream, Bern University) where done. His research was conducted in Dr Riemersma private practice; and the Coeffient of Friction was determined between Equine Feet and several hard ground services both with a force plate as well with a mobile friction-measuring device and published soon after.

In the year 2009 he passed his surgical boards and became a Diplomate of the European College of Veterinary Surgeons (Dipl ECVS) the ultimate degree in Veterinary Surgery.

Since the year 2009 I have been running my own company VOS (Veterinary Operation Services BV), and perform Surgeries on a daily basis on Horses as well as Small Animals in the Netherlands most of the time.

As of the year 2013 I have been involved in a cartilage repair project of Professor Karperien at the Technical University of Twente, as part of an external PhD program.