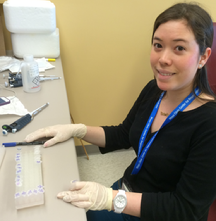 Catalina Galeano received her Bachelor degree in 2013 in Biomedical Engineering at Antioquia’s School of Engineering in Colombia. During her bachelor’s she moved to France to pursue a master degree in engineering at Ecole Superieur des Arts et Metiers, then she continued with a second master’s degree in Tissue Engineering and Tissue Biomechanics from the Paris Institute of Technology (ParisTech). During her master’s she did a summer internship at the VU medical center in Amsterdam, The Netherlands under the supervision of Dr. Marco Helder in a project titled “Cell-matrix interactions in pelvic organ prolapse” where she stayed during 5 months. She graduated of her master’s at the beginning of 2014 with a thesis titled “Cell adhesion control on implantable biomedical devices” at the Institut Curie under the supervision of Dr. Vincent Semetey in Paris. Since 2013 she has been working under the supervision of Dr. Andre van Wijnen at the Department of Orthopedic Surgery at Mayo Clinic, in a project title “Molecular validation of chondrogenic differentiation and hypoxia responsiveness of adipose-tissue derived human mesenchymal stem cells”. She started working as a PhD student in the University of Twente in June 2015 in the research group leading by Dr. Marcel Karperien.