Controlled drug release is a promising approach to deliver medicine over a prolonged period of time. Therefore, this technique is wide explored for numerous therapies including anti-cancer therapies. Moreover, it has the potential to steer (stem) cell fate in engineered tissues by controllably release molecules to control the tissue’s microenvironment. Thus controlled release can also contribute to the field of regenerative medicine to replace, repair, or regenerate damaged, diseased, or aged tissues. Our capability to generate control the release of molecules of choice is thus of paramount importance.

In this project we will fabricate drug releasing micromaterials using microfluidics. By exploiting a unique chemistry, we will be able to controllable and on-demand release drug from the micromaterials, which will act as smart and responsive drug depots. Uniquely, we are developing micromaterials that can be released upon being triggered for an inducible release. Moreover, we can control the hydrophobicity of the micromaterials, which we expect will grant further control over the release kinetics. Lastly, to obtain prove of functionality, these microparticles will be used to steer stem cell fate by releasing biomimetic peptides.

Specifically, you will be involved in the microengineering of the microparticles, examining the inducible release, and determining the effect of hydrophobicity on its release kinetics. This project will therefore provide aspiring students with an interdisciplinary skillset and knowledge framework on microfabrication, microfluidics, biomaterials, tissue engineering, and stem cells. 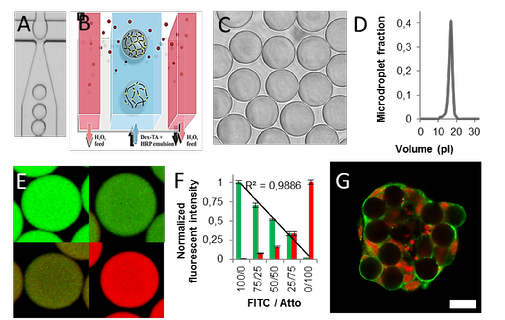