University of Twente’s expertise in the field of advanced cooling techniques will be a crucial contribution to the development of the Einstein Telescope, the future European detector of gravitational waves. Of the scale model of the telescope, ETPathfinder that was opened today by the Dutch Minister of Education, Culture and Science in Maastricht, a partial copy is now present at the UT campus: a vacuum tower for testing vibration-free cooling techniques.

Already before the first observation of gravitational waves, using the LIGO detector in the USA and leading to the Physics Nobel Prize for Thorn, Weiss and Barish in 2017, a European detector was on the drawing board, offering much higher sensitivity: the Einstein Telescope. The project was approved, although the location is still to be decided on. The proportions of the system are almost unimaginable: it has the shape of an equilateral triangle, each side consisting of a tube of 10 kilometer long, 250 meter below the ground. At the angles, towers emit laser beams that are reflected by mirrors inside the towers the other angles. The smallest ripple, caused by a gravitational wave, alters the laser beam.

The high precision mirrors that reflect the laser light, will be cooled down to about 10 Kelvin (minus 263 degrees Celsius). The big challenge is to use a cooling technique that doesn’t vibrate by itself – thus influencing the detection. This is the expertise that the group Energy, Materials and Sytems of UT's MESA+ Institute typically brings to the project: the researchers know how to deal with these extreme conditions, from an earlier project with the European Space Agency. 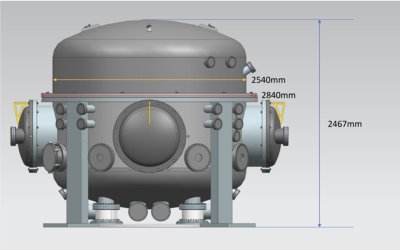 That’s why at the campus, in the High Pressure Lab, a scale model of one of the vacuum detection towers has been installed, about 3 meter in diameter and 2.5 meter in height. The actual tower that will be placed in the Einstein Telescope will roughly be 20 meter in height, in order to keep the mirrors free from vibrations. At the University of Maastricht, a scale model of the full Einstein Telescope is now being built: this ETPathinder, opened on 8 november, is not meant for detecting gravitational waves already, but to do research on the boundary conditions and detector technology. The location is not coincidental, as the Dutch-German-Belgian border region is a candidate for the location of the full size Einstein telescope. The UT researchers closely collaborate with their colleagues of Maastricht University and of NIKHEF, the national institute for subatomic physics.

The Energy, Materials and Systems group has decades of experience in cooling and superconductivity for major physics projects. They contributed to the particle accelerators at CERN in Geneva and to the fusion reactor ITER in Cadarache. “We typically work on enabling technology for big science”, group leader Professor Marcel ter Brake says. In 2018, an innovative type of wind turbine was tested at the Danish coast, with a superconducting – and strongly cooled down – rotor. The group largely contributed to this project. Next to expertise on cooling and superconductivity, the MESA+ Institute has expertise on creating high-precision mirrors, consisting of nanolayers.