Making a dark human hair transparent, or even an opaque bar of silicon: this optical ‘sorcery’ is possible by manipulating the incident light. This new phenomenon is called ‘mutual extinction and transparency’. Until now only existing in theory, photonics researchers of the University of Twente’s MESA+ Institute demonstrated the effect with experiments. Applications include, for example, broadening the applicability of microscopy, as to include observation of opaque objects. The research team publishes its findings in Physical Review A.

The effect goes beyond the interference we well know: light waves joining together and interfering in a constructive or destructive way. If a light wave passes through an object, the wave is split and deflected in every direction and also interferes with the wave that moves ‘straight on’. If you now send another light wave, under an angle, to the same object, the expectation could be that the deflected light only interferes with the beam that caused the deflection. In reality, there is also interference with the other beam. 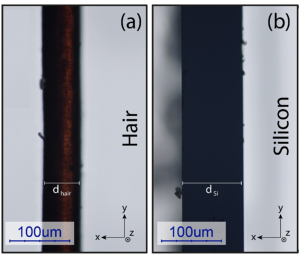 The transparency of a human hair (left) and a bar of silicon (right) can be tuned, in this way it is also possible to determine the exact thickness

And that is where the ‘programming of light’, called Wave Front Shaping, comes in. A well-known example of this technique, invented by the same group in 2007, is sending light to an opaque medium and creating a bright spot at the backside. Is it now possible to ‘tune’ how much light actually passes through and around the object using the two waves? So, is it possible to make a shadow vanish or to make the object as transparent as you want? The answer is yes. In fact, the interplay between the two waves is now programmed to tune transparency and opacity. In their experiments, the researchers demonstrated how this works out for a human hair or a bar of silicon. These objects  can get fully transparent or twice as opaque. 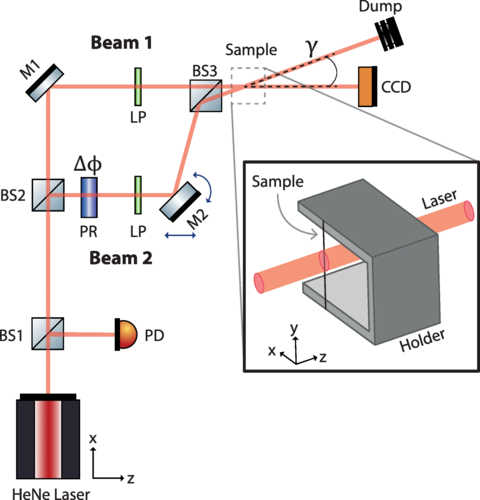 Lab setup with the laser light source (below left) and the sample (above, right). The light falls on the sample under two angles, through a system of mirrors (M), and beam splitters (BS). The light is captured using a CCD camera.

This mutual extinction and transparency effect has nothing to do with picture manipulation afterwards: the effect creates the best circumstances beforehand and thus may enhance microscopy techniques and other applications in which opacity is detrimental and could be tuned away.

The research was done in the Complex Photonics Systems group (COPS) of Professor Willem Vos The group is part of UT’s MESA+ Institute for Nanotechnology. This research was made possible by Dutch Research Council (NWO-TTW ‘Free form scattering objects) and the Applied Nanophotonics section of MESA+.

The paper ‘Observation of mutual extinction and transparency in scattered light’, by Alfredo Rates, Ad Lagendijk, Ozan Akdemir, Allard Mosk and Willem Vos, is now in Physical Review A.