A crystal with a ‘3D photonic band gap’ is a powerful tool to control light. New types of solar cells, sensors and miniature lasers can highly benefit from this. Inside a man-made crystal like this, a range of light wavelengths is forbidden. Until now, the characteristic wavelength region is determined  by using theoretical models. These idealized models have clear shortcomings. Researchers of the University of Twente (MESA+) now developed a fully experimental method of determining the band gap, literally making visible the unseen. They present their results in Optics Express, by the Optical Society of America.

Photonic crystals open up exciting new ways of manipulating light using silicon. This material in itself is not suitable for controlling light, as it is transparent for the colours of light used in telecommunication. Photonic crystals have a special structure, forbidding a range of wavelengths passing through, thus adding control of light in silicon and opening up the possibility of connecting electronics and photonics. 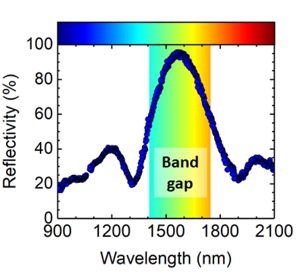 Creating these crystals with the desired ‘signature’ is a matter of nanoscale fabrication, leading to a pattern of pores that is perfectly periodic. Still, what is the result? How do pore size and ‘forbidden range’ match? Theory and simulations always start with some assumptions. It simply is impossible to include all fabrication disorders, for example. Scientists of the University of Twente therefore choose an approach that is fully experimental, thus giving valuable feedback to the design and fabrication process.For this, they fabricated 3D photonic crystals with a band gap in the wavelength area typically used in telecommunication, also called ‘inverse woodpile’ structures. By shining light on it, of a broad bandwidth and over many angles of incidence, the researchers can measure reflectivity, identifying the exact range that is forbidden. They do this for two polarizations of the input light, perpendicular to each other. For both polarizations, the width of the photonic band gap should be the same, which is confirmed by the measurements. High-quality crystals should show over 90 percent of reflectivity in the forbidden band: this is confirmed by the experiments.

Using the new probe technique, it is possible to rapidly evaluate the quality of a photonic crystal, making it easier to tune the fabrication process for new and challenging applications in opto-electronics and quantum photonics.The research has been done in the Complex Photonics Group of the MESA+ Institute at the University of Twente. It is supported by the Dutch Research Council NWO (programmes ‘Free Form Scattering Optics’ and ‘Stirring of Light’) and the ‘Applied Nanophotonics’ section of the MESA+ Institute.