Photonics researcher David Marpaung of the University of Twente (MESA+ Institute) will receive a START-UP grant of the Netherlands Organisation for Scientifc Research (NWO). This enables him to do research on the interaction of light and sound waves, for low noise photonics applications.

START-UP grants, introduced in 2018, go to recently appointed professors and associate professors in the field of physics and chemistry. These 'principal investigators' can use the money to work out new and creative ideas that fit within the research areas of the Dutch ‘Physics and Chemistry Sector Plan’.

David Marpaung will use the 800,000 euro grant for his project ‘Light-directed gigahertz phonons on an optical chip’: it is about the behaviour of ‘acoustic phonons’, a sort of sound particles that form sound waves with very high frequencies (GigaHertz reach). These sound waves, formed by interaction of light, - phonon-photon interaction - will play an important role in photonics. They can help reducing noise in photonics applications, for example. Marpaung wants to understand the underlying mechanism and develop new materials for controlling it. In 2017, he already received another NWO grant: the Vidi. 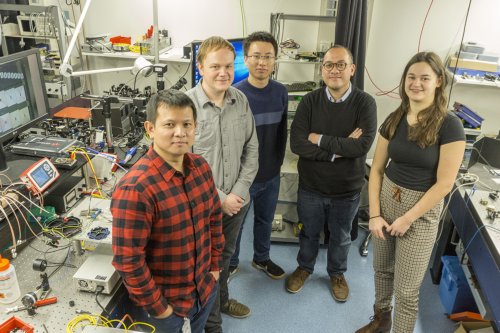 Recently, he wrote a review article on the future of photonics in the leading journal ‘Nature Photonics’. The interaction of light and sound is one of the new directions.