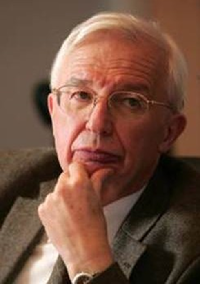 Jean-Marie Lehn was born in 1939 in Rosheim, France. In 1963 he received a PhD in chemistry from the University of Strasbourg and in 1970 he became professor of chemistry at Louis Pasteur University in Strasbourg. From 1979 to 2010 he was also professor at the Collège de France in Paris (Chaire de Chimie des interactions moléculaires). In 2002 he founded the Institut de Science et d’Ingénierie Supramoléculaires (ISIS) in Strasbourg, where he continues directing a group. Jean-Marie Lehn is presently Honorary Professor at the Collège de France in Paris and Professor Emeritus at the University of Strasbourg.

In 1987 Jean-Marie Lehn received the Nobel Prize in Chemistry together with Donald Cram and Charles J. Pedersen for their development and use of molecules with structure-specific interactions of high selectivity. Over the years, his studies on the chemical basis of “molecular recognition”, which also play a fundamental role in biological processes, led him to define a new field in chemistry which he named: Supramolecular Chemistry. It deals with the design and synthesis of complex chemical entities held together by intermolecular forces. In later years, Jean-Marie Lehn’s research interests expanded towards adaptive chemistry and complex systems.

Jean-Marie Lehn is author of more than 900 scientific publications and has received numerous international honors and awards. In addition to chemistry his other passion is music. He started playing piano and organ already at very young age.