The PhD defence of Pengcheng Huang will take place (partly) online and can be followed by a live stream.
Live Stream 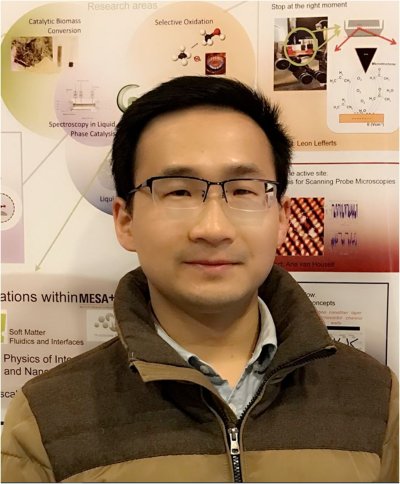 The effect of the solvent environment is important for the activity and selectivity of a catalytic reaction conducted in the liquid phase. One must carefully consider the potential interactions between the solvent molecules and the reacting species as these interactions can alter mass transfer rates, reaction kinetics, product selectivity, and catalyst stability as well as the properties of the solvent including density and viscosity. As a result, these so-called solvation effects can induce a significant change in the catalytic performance. However, finding the perfect “marriage” between the solvent, reaction, and catalyst is difficult as only a few solvents can deliver the desired performance. Essentially, the best solvents to stabilize the reactants and products in the bulk might not be the optimal solvation environment for the catalyst. A promising approach could be to decouple the local reaction environment of the active sites from that of the solvent in the bulk. This can be achieved with a polymer coating that can induce a solvation effect near the active site. In this thesis, a thermal-responsive polymer (p-NIPAM) that has a lower critical solution temperature (LCST) has been employed as polymer coating on a model Pd/SiO2 catalyst to validate this concept. The effect of the solvent and polymer-induced solvation effects on the reaction selectivity and activity have been studied using the nitrite and nitrobenzene hydrogenation reactions as probe chemistries.

In order to further increase the selectivity of nitrite to harmless N2 by suppressing the formation of NH4+, it is essential to understand the Pd-catalyzed nitrite hydrogenation mechanism in detail. A rigorous kinetic study was conducted in a wide window of nitrite and hydrogen concentrations to interrogate the underlying surface chemistry. The results (Chapter 2) showed a negative  reaction order when the H2 pressure was low, which implies competitive adsorption of  and H2 on the catalyst surface. At the same time, the observed high H2 reaction order (c.a. 1.5 at low concentrations of H2) suggested that the rate-determining step (RDS) required several pre-equilibria involving hydrogen. Based on these observations, several RDS and reaction pathways have been analyzed. By combining kinetic modeling and density-functional theory (DFT) calculations, it was demonstrated that the reaction is co-limited by two consecutive surface elementary steps, involving the first and second hydrogenation of NO*. The degree of rate control (DRC) analysis suggested that the RDS can shift with the reaction conditions (temperature and reactant concentrations) from the first hydrogenation of NO* to the subsequent hydrogenation of HNO* to HNOH* species.

To study the effect of polymer on nitrite hydrogenation reaction, a thermal responsive polymer-coated catalyst has been synthesized via the atom transfer radical polymerization (ATRP) method and applied to nitrite hydrogenation (Chapter 3). The results showed that the presence of polymer lowers the apparent activation energy barrier of the reaction when the reaction is conducted below the LCST of p-NIPAM. Further analysis based on transition state theory showed that the polymer-coated catalyst provides an excess of Gibbs free energy that lowers the entropy and enthalpy of the nitrite hydrogenation reaction at low temperatures. Increasing the temperature above the LCST, at which the polymer collapsed, led to apparent barriers that were similar to those observed on the uncoated  Pd/SiO2 catalyst.

Chapter 4 studied the effect of polymer coated catalyst on nitrobenzene hydrogenation reaction. A detailed reaction kinetic study showed that the polymer-coated catalyst can improve the selectivity to aniline. More importantly, the presence of the polymer coating lowered the apparent activation energy barrier of the reaction especially when the temperature was below the LCST, resembling the behavior observed in the case of nitrite reduction (Chapter 3). This phenomenon was explained using the transition state theory treatments of the reaction kinetics. Here, it was demonstrated that the presence of polymer decreased the entropy and enthalpy of the nitrobenzene hydrogenation reaction. Further nuclear magnetic resonance spectroscopy (NMR) characterization was used to study the diffusion of the p-NIPAM coupled to Pd/SiO2 in the presence of nitrobenzene and water at a temperature below and above the LCST. Here, we showed that the polymer-coated catalyst has a lower self-diffusion coefficient below the LCST than pure polymer in solution, while above the LCST, a higher self-diffusion coefficient was obtained due to the changes in surface wettability of the polymer-coated catalysts. This indicates that the hydrophilic and hydrophobic properties of the polymer will greatly affect the diffusion of the catalyst. Also, we showed that the presence of nitrobenzene reduces the self-diffusion coefficient of the polymer brush. These phenomena suggested that the presence of polymer not only modifies the diffusion of catalyst particles, but also the interaction with reactive species.

Solvent and corresponding solvation effects play a germane role in chemical conversion processes as they can greatly alter the reactivity, selectivity, and stability of catalytic materials. For this reason, we focused our attention on assessing the impact of polymer and solvent interactions on nitrobenzene hydrogenation (Chapter 5) as this probe reaction is rather sensitive to the operating conditions particularly when the catalyst is covered by thermo-responsive polymers. This was accomplished by changing the solvent from pure water to mixtures with increasing concentrations of 1-methyl-2-pyrrolidone (NMP). Here, we observed that increasing the water content enhanced significantly the catalyst activity. The higher TOFs were accompanied by a decrease in the apparent activation energy barriers on the parent Pd/SiO2. Notably, in pure NMP, the activity was negligible for this reduction reaction. This was attributed to the poor interaction of NMP with H+, which is believed to be key for achieving high rates in the liquid phase. Dynamic light scattering (DLS) characterization revealed that as the NMP concentration increases, the transition of the polymer from swollen to collapse states at the LCST disappears completely. As a result, using 30 vol.% H2O/NMP as solvent shows a constant activation energy barrier along with the temperature changes(i.e. non-thermal responsive behaviour). These results suggest that the solvent-polymer interaction is key to inducing the desired responsive-solvation effects at temperatures below and above the LCST. Also, it reveals that proton shuttling is essential in the hydrogenation of nitrobenzene in liquid environments.

Chapter 6 shows the highlight of this work and the conclusions. Also, a number of recommendations are proposed based on the main experimental observations and theoretical models herein reported.