Hao Wu is a PhD student in the research group Physics of Complex Fluids (PCF). Her supervisor is prof.dr. F.G. Mugele from the Faculty of Science and Technology (TNW). 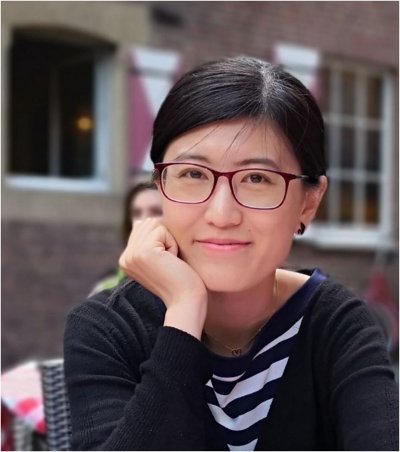 For some EW applications, the liquids need to be manipulated in confined regions. For example, in electrowetting display devices, the movement of the two liquids (oil and water) is controlled in many micron-sized pixels. In such a situation, the wettability contrast of the hydrophobic surfaces and the hydrophilic pixel walls is essential for the performance of the devices. In Chapter 3, we have proposed a “reconstruction” method to achieve hydrophobic/hydrophilic surfaces with ultrahigh surface wettability contrast. The performance of electrowetting display devices have been significantly enhanced by using such a method.

In EW applications, there is a long-standing issue—the charge trapping problem. It has been reported frequently in the literature that the charge trapping phenomenon will degrade the performance of the electrowetting devices. However, the microscopic investigation and a clear revelation of such a phenomenon is still missing. In Chapter 4, we have investigated the charge trapping phenomenon in a microscopic way by using three approaches of contact angle probe, electrowetting probe, and Kelvin probe force microscopy. The charge trapping is proved to be accumulated at the three phase contact line (TPCL) region and the charge density is determined by the electric field applied to the dielectric film. After revealing the phenomenon itself, we found that this “electrowetting-assisted charge injection (EWCI)” can be utilized as a simple and low-cost method to fabricate surface charges. The negative surface charges fabricated by such a method are very stable, even in harsh environments. Although these charges are not favored in electrowetting applications, they could be widely used in many other fields, such as nanogenerators, super capacitors and nanofluidics.

Following these findings, in Chapter 5 we proposed a novel charge trapping electric nanogenerator (CT-ENG) for generating electric power from water drops. The EWCI method has been improved by utilizing composite dielectric layers with a SiO2 layer of a higher dielectric strength. By protecting the TPCL, we have achieved centimeter sized charged areas. By using this proposed CT-ENG, electric current at mA level can be achieved (in theory, it could be infinitely high). We have investigated the working principle of CT-ENG by performing synchronized measurements of water/solid contacting area and electric current. A numerical calculation based on a physics model has predicted the electric generation process without any fitting parameters. A scaling law for energy harvesting by using CT-ENG is proposed for the optimization of the configurations.

In Chapter 6, we revealed the factors influencing the performance of CT-ENG in detail by carrying out case studies of CT-ENG in sliding mode. We have enhanced the surface charge density by optimizing the dielectric layers and the liquid pH during EWCI process. Surface charge density as high as 1.8 mC/m2 has been achieved, and the efficiency of energy harvesting from water drops reaches 10%.

Hao Wu is a PhD student in the research group Physics of Complex Fluids (PCF). Her supervisor is prof.dr. F.G. Mugele from the Faculty of Science and Technology (TNW).