The main program of that day consisted of three lectures and a workshop.

The final remarks were given by Prof. dr. Carla Millar, the chairman of the day.

Her words give a good impression of the day.

In the ‘UT nieuws’ of November 17th an article about the conference was placed. 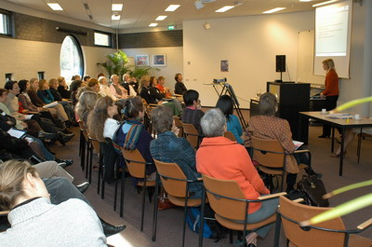 Summing up in the closing session of the 1st Conference

I would like to present my summing-up under three headings:

So, on my first point: our aims and goals were awareness of the issue, and attention to how we can all be more professional in our life and work as academics. Ultimately we would like this university to have a better balance between male and female faculty members at all levels, and we would like to see more women in higher functions at the university, both in academic and in administrative positions.

And with the Female Faculty Network Twente (FFNT) we are going about it the right way - by being more professional, by making sure we are ready ourselves. As women, we are always juggling all those balls we have to keep up in the air: home and work, enjoyment and achievement, going for what 'counts most' or for what gives us most self-fulfilment. Professionalisation will help us do this better.

The second point: our achievements today are in internalising the elements, rational and emotional, that have come out of the wonderful documentary Mineke Bosch showed, the talks by Sonia Heemstra de Groot and Annemarie Mol, and the opening words of the Rector Magnificus of the University of Twente, Henk Zijm. And in particular, our achievements lie in working together in the workshops during the afternoon session.

The Rector's opening words showed us that he is clearly aware of the issues, and of their implications. We might or might not agree with his Billie Holiday association or the making your own clothes reference but he actually stated:

The documentary entitled “The mind has no sex - Women and science today” (A documentary of Marian Thaden, first presented at “Slotmanifestatie 'Doorbreking Genderkloof Universiteiten', May 12 2005, Amsterdam)

brought along by Mineke Bosch showed us

I would like to propose that our decision makers: our Deans, our members of the Management Teams and of the University Board all see the film, and that they do the test as used at the Massachusetts Institute of Technology!

Sonia Heemstra de Groot's session made us aware of the difference between university and industry life, and their advantages and disadvantages.

Freedom and flexibility vs. Deadlines and pressure

Fulfilment in research vs. Research for economic value

with too many meetings inevitable job insecurity

We learnt that gender is an important input especially when innovation is aimed for.

Annemarie Mol showed us through a series of exciting paradoxes

I share this perspective as I have the perception that roughly speaking there are two types of people: 'sap' people and 'zap' people: they either drain you, or energise you.

And you can influence your environment by the way you behave and are perceived.

The sky may be the limit but there is no law that says that you must reach for the stars. And for many, and many times it is better to have one happy bird in the passionate hand, than two gold winged ones high up in that unreachable sky!

Listening to the talks and discussions today I saw my own life flash past - much of what you said, I have experienced; the balls up in the air, the choices, the confidence you need, sewing my own clothes, industry pressure, discrimination, being passionate. So I understand your concerns, and am aware of where we are. And I fully agree with those who say: let's stop complaining, let's do something.

And that brings me to the third and last point of my summing up: action.

The Rector ended his talk with real action points for the Board of the University:

Some outcomes of our discussions and workshops were:

That gives the university and ourselves sufficient action points for the year ahead.

Bridging the gender gap in science

Last Thursday about 50 women gathered in Drienerbrught for the Female Faculty Network Twente's (FFNT) first conference, entitled Professional Women. Ranging from PhD candidates to full professors, hailing from China to Bulgaria, UT professional women assembled not to `sing the blues' - as Rector Henk Zijm maladroitly suggested in his opening discourse - but to constructively discuss challenges facing professional women in the engineering sciences and their respective solutions.

Speakers, beginning with Rector Zijm, brought up sobering statistics throughout the day. For example, at the UT there are 127 male full professors and a mere 8 female full professors; associate professors are 87% male and 13% female. According to CBS, 6.7% of Dutch full professors are women, compared to an average of 15% in Europe overall. Dr. Mineke Bosch, associate professor in the Centre for Gender and Diversity at the University of Maastricht, informed participants that only 8 of the 200 KNAW (Royal Netherlands Academy of Arts and Sciences) are women. Sonia Heemstra de Groot, associate professor in Design and Analysis of Communication Systems and chief scientist for Twente Institute for Wireless and Mobile Communications, citing a 2004 Eurostat news release, reported that within the EU 58% of university graduates are women, yet only 40% of PhD recipients are female. It is worse in the Netherlands where only 31% of doctoral degrees are conferred to women.

Confronting the numbers is just one issue. What are the attitudes toward women in science and engineering? Bosch showed a documentary directed by Marian Tjaden, which is part of a VPRO project (`Waste of Talents') begun in 1998. Still a work in progress, the film deals in part with Dr. Nancy Hopkins, a molecular biologist at MIT, and her unwitting crusade to bridge the gender gap. The consequences of her actions led to the Study on the Status of Women Faculty in Science at MIT, published in 1999. Presenting the study to MIT faculty, President Charles Vest avowed, `I have always believed that contemporary gender discrimination within universities is part reality and part perception. I now understand that reality is by far the greater part of the balance.' Such bold acknowledgment on the part of a powerful figure in science and academics has enabled women scientists all over the world to raise issues of both blatant and subtle discrimination that they have discreetly suppressed for decades. During the same period in the Netherlands, a representative of the KNAW is on film saying, `If women want to become professors, they shouldn't think it will be easy. They must make choices - they will no longer be able to sew their own clothes.'

Heemstra de Groot offered solutions to the shocking scarcity of Dutch women in top positions in academia and industry. She suggested increased social support in the form of tax breaks, day care, school lunches. She would like to see an improved image of science and engineering nationwide. High school teachers should be targeted to guide girls toward a heavier orientation in math and science. There ought to be more female role models. And, she is a proponent of affirmative action. Heemstra de Groot concluded with the claim that until the Netherlands addresses the gender discrepancy, the country `will be handicapped with respect to European and increasingly global competition.'

No doubt at least one male reader is thinking, `Who cares if there are more women in science and engineering?' Answers to this tacit question were proposed all morning. There is a nationwide shortage of scientists and engineers; women are an untapped resource. Studies also show that women think and work differently than their male counterparts. They tend toward interdisciplinary approaches, which are demanded more and more in scientific research.

While he rejected a proposal that five women professors be added to each university, Rector Zijm was firm in his support for positive action to encourage more women to attain higher decision-making positions in engineering sciences, insisting that he is only `debating its form, not its principle.'

It was exhilarating to see so many brilliant professional women together in one place, discussing a concern they share but one about which they have almost no professional training. The atmosphere was earnest but relaxed, and overwhelmingly positive. Dr. Marianne Boenink, an assistant professor of Philosophy, recently back from maternity leave, said that the conference gave her pause to `reflect on my own position as a woman in the university.' Dr. Marina van Damme-van Weele, the first woman to earn a PhD from the UT, reminded junior colleagues to `be active, look for new challenges. No one gives chances; you have to ask for them.'

At the end of the conference, the Marina van Damme award was given to UT-alumnaThelma Stobbelaar. Epitomizing the professional woman struggling to balance the demands of career and family, Stobbelaar was unable to collect the award in person because she was giving birth at the time.