Our aim is to further develop a water wave model, the so-called Variational Boussinesq Model (VBM) to be more applicable for practical applications in coastal engineering such as simulating short waves, e.g. wind waves entering a harbour, as well as for long waves, e.g. tsunamis. In the previous PhD project, the dispersive properties of the model are improved significantly by an optimization of vertical profiles in the VBM approximation. This optimization has a consequence that the model has a tailor-made dispersion relation which makes the model more flexible for simulating very short waves as well as very long waves. 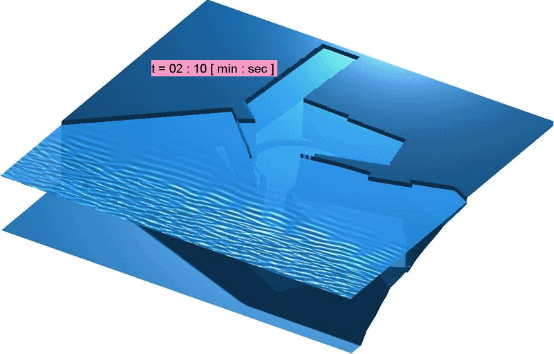 Figure 2. Wave disturbance (in percentage) of simulations with short-crested waves (left plot) and their comparison with measurement data (right plot). Measurement locations are denoted by numbers in the left plot.

In this project, the accuracy of the model for simulating short-crested waves entering a harbour is tested against experimental data from Deltares.

In Figure 1, simulation of short-crested waves entering the harbour of Limassol is shown. The resulting wave disturbance (normalized significant wave height with its value at influx’s location) from the simulation and their comparison with measurement data are shown in the left and right plot of Figure 2, respectively.

Futhermore, in this project, we will incorporate several physical phenomena of coastal waves such as wave breaking, bottom dissipation and runup (flooding and drying) into the VBM. Besides that, the VBM will be extended for calculating a pressure on a ship orstructure by waves.

The VBM software has been included in a software package under the name HAWASSI-VBM (Hamiltonian Wave Ship & Structure Interaction – Variational Boussinesq Model). The first release of the software in September 2015 is for simulating wave-structure interaction, the wave‐ship interaction is foreseen in future releases. The software includes several test cases presented in publications. More information about the software can be found on www.hawassi.labmath-indonesia.org.