Accurate mass flow sensing is of the utmost importance for a vast number of micro-fluidic applications, such as DNA or chemical analysis devices. Using a Coriolis force-based sensor, a number of problems can be overcome in comparison to other flow sensor devices. The main advantages of a Coriolis-based sensor are that it measures true mass flow, independent of the temperature, flow profile, density, viscosity, and homogeneity of the fluid.

The main principle of a Coriolis sensor can be seen in the figure below. If there is a mass flow in the given direction, the Coriolis force causes the U-shaped loop which is vibrated with a frequency ω to deform over the angle θc. The force (and hence the deformation) is directly proportional to the mass flow rate. 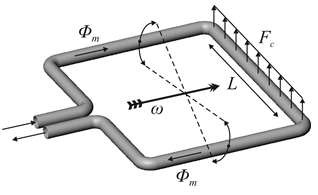