Sometimes, distillation is impractical to separate mixtures due to high energy consumption, or even it might be impossible due to azeotropes. Alternatively, affinity separation processes such as extractive distillation (ED) and Liquid-Liquid Extraction (LLX) can be applied. The separation of aromatic from aliphatic compounds is one example where ordinary distillation can be impractical. The addition of an affinity agent, or solvent, can bring a solution by increasing the relative volatility or even breaking azeotropes.

This BSc-project is part of a larger project where we try to understand molecular interactions between solvents and mixtures that we want to separate. In order to do so, we study both common solvents such as sulfolane that have been industrially used for decennia already and innovative new solvents. Deep Eutectic Solvents (DES) are a relatively new concept [1, 2], they consist of two solids that upon mixing become a liquid, because the melting point of the mixture is significantly lower than the melting points of the two constituents. Additionally, It is possible to make DESs from biobased molecules making it a potential green solvent. 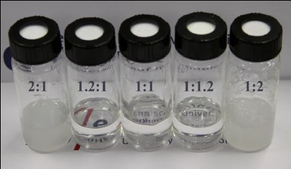 To increase the understanding of using Deep Eutectic Solvents (DES) in extraction processes, and in particular aromatic-aliphatic extractions, a large amount of different DESs has to be created and analyzed. In the end, we want to understand the effect of changing the molecular structure of the DES to the extraction performance. In this Bsc-project we will start with the investigation of 2 hydrogen bond donors and 2 hydrogen bond acceptors, namely;

We will attempt to create DESs with these four possible combinations by mixing them in various ratios. However, it may be possible to investigate even more DESs with different HBA or HBD. The newly made DESs will be characterized with:

The extraction potential of the newly made DESs in aromatic-aliphatic mixtures will be investigated by liquid-liquid extraction (LLX) of a model system, n-heptane-toluene. The LLX extraction experiments will be analyzed with the Gas Chromatograph (GC).