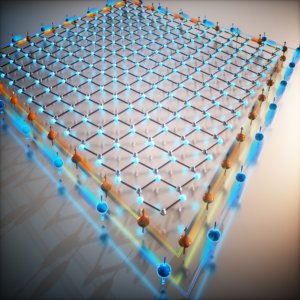 The aim of this project is to synthesize novel topological materials that exhibit the QSH effect up to room temperature and to realize topological phase transitions. The project relies in ultra-high vacuum techniques such as low temperature scanning tunneling microscopy and spectroscopy, electron diffraction and MBE growth processes.

If spin orbit coupling is not taken into account, monoelemental two-dimensional materials (graphene, silicene, germanene…) are perfect semimetals, i.e. they are gapless, and the density of states (DOS) vanishes at the Fermi level. The electrons behave as massless relativistic particles and are described by the relativistic variant of the Schrödinger equation, i.e. the Dirac equation. Spin-orbit coupling (SOC) opens up an energy gap. Because of the SOC gap these 2D materials can realize the topological state proposed by Haldane and can exhibit the quantum spin Hall (QSH) effect. The QSH effect is a novel nontrivial topological quantum state of matter that has been proposed in 2005 by Kane and Mele for graphene. Materials exhibiting the QSH effect are called quantum spin Hall insulators. A prominent example that we are currently working on is germanene, the germanium analogue of graphene. QSH insulators, such as germanene, are characterized by an energy gap in their bulk and two counter-propagating, topologically protected spin polarized edge states. The edge states are protected from backscattering by time-reversal symmetry, allowing for electronic transport along the edges of the material that does not dissipate energy. Therefore, QSH insulators are suitable for devices, such as dissipationless electrodes and topological field-effect transistors, promising to revolutionize modern electronics.

For more information on this project please contact Pantelis Bampoulis