The structure and behavior of the interfacial contact between water and solid surfaces are of the highest fundamental and practical interest in environmental sciences, many biological systems, in corrosion effects and (nano)fluidics. We study intercalated water between  a hydrophobic graphene layer and a hydrophilic substrate, for instance mica. We observed exciting physical phenomena, substantially different from bulk equivalents. A continuous multilayer crystal-like water film is observed by Scanning probe Microscopies. Exposure to low relative humidity (RH) results into evaporation of water molecules through defects into the 3D ambient. The heat extracted from the system by the evaporation of the intercalated water molecules initiates the growth of 2D hexagonal ice crystals, with long range order. The 2D ice crystals have a fractal appearance due to rotation limitations of the incorporated water molecules. The structure of the ice fractals depends strongly on the evaporation rate and the graphene thickness (in the case of multilayer graphene). 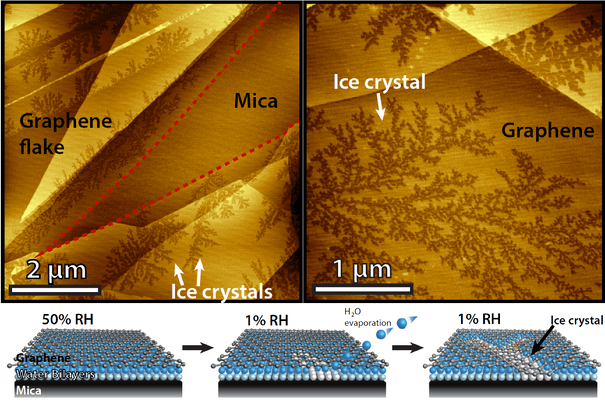 Furthermore, by controlling the ice layer one can alter the electronic properties of the graphene cover, desirable for future nano-electronic systems. Moreover, by changing the nature of confinement hydrophobic/hydrophobic  or hydrophilic/hydrophilic as well as the structural properties of the surfaces, the structure and behavior of water changes substantially. Droplet-like structures as well as unconventional layered water films with rich phases are observed. In all cases the ability of graphene to accurately conform the underlying morphology provides a great tool in understanding the behavior of water at the nanoscale.

As a part of the Netherlands Centre for Multiscale Catalytic Energy Conversion gravitation research program we currently research the reduction of water intercalated between graphene (conductor) and mica (insulator). This 2D confined water, is reduced to hydrogen upon application of a negative potential, resulting in the nucleation of nanobubbles at this interface. These nanobubbles open up the pathway towards nano-reactors. The use of graphene also opens up the possibility to monitor the molecular dynamics of the water during electrolysis.

An image taken from our article “Coarsening dynamics of ice crystals intercalated between graphene and supporting mica” has appeared on the cover of the first issue of 2016 of the journal Applied Physics Letters: 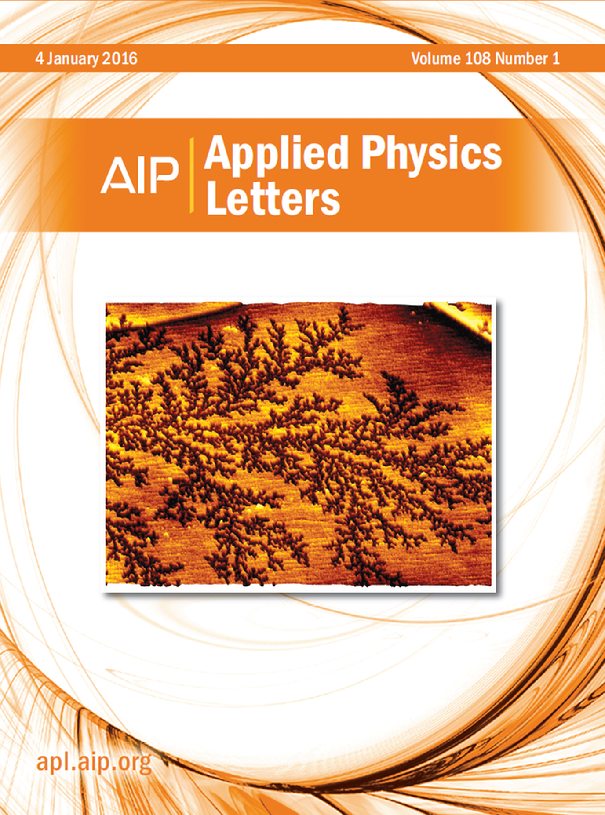 In the article we study the structure of ice fractals confined between graphene and mica. The growth of the ice crystals is initiated by the heat extracted from the system by evaporation, into the 3D ambient, of water molecules intercalated between mica and graphene under low humidity conditions. We demonstrated the fractal shape dependence on the graphene cover and the evaporation rate of the water molecules from the double bilayer. We found that the thickness of the fractals’ fingers scale as the square root of the ratio of the bending energy of graphene plus the surface energy of the intercalated ice and the product of the velocity of the fractal front and a term related to hindrance of the water ad-molecules. Ice fractals formed under a thick graphene cover and upon a low evaporation rate are thick with few side branches, whereas fractals grown upon high growth rate under single-layer graphene are thin and very ramified. We attribute the coarsening of fractals to the extra degree of freedom of the surrounding water molecules, enabled by the non-complete adaptation of the ice crystal’s morphology by the graphene cover. Our findings shed light on the intriguing shapes and structures of ice crystals intercalated between graphene and mica.

The work is a result of a close collaboration between the Physics of Interfaces and Nanomaterials (PIN) group and the Physics of Fluids (POF) group of the University of Twente.