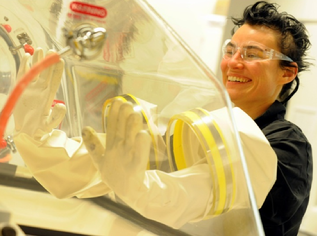 The “InstantCount” project develops printed microfluidic cell counting chambers for point-of-care blood tests, with the goal to provide diagnostics to resource-poor settings with no access to lab testing.

The concept of the test is based on the release of cell staining reagents from hydrogels to realize on-chip sample preparation. Based on this principle, we have demonstrated a simple and affordable CD4 count, a test that is used for HIV staging, and are currently developing printing techniques to fabricate these tests in an affordable and reproducible way. At the same time, new assays, such as a malaria test and a differential white blood cell count based on the same principle are developed and new materials for the release of reagents on microfluidic chips are tested. Read more…

My graduation project at the Friedrich-Alexander Universität, Germany and the Eindhoven University of Technology, The Netherlands (2001- 2002) was centered on the “Synthesis and Characterization of Functional [60]Fullerene Adducts for Use in Photovoltaic Cells”, devising and photophysically characterizing new materials for the use in photovoltaics.

After obtaining my MSc in chemistry, I stayed at the Eindhoven University of Technology (2002-2006) and delved deeper into the matter of triplet states in “Photophysical and Theoretical Studies on Functional Molecules with a Focus on the Characterization of their Lowest Excited Triplet States” as a graduate research assistant.

After the successful defense of my thesis, I joined the Max-Planck Institute for Molecular Physiology, Germany (2007-2008) as a Post-doctoral Max-Planck Fellow. I was introduced to the field of biophysics working on “Androgen Receptor – Co-factor Interactions: Inhibition Using Synthetic Androgen Receptor Co-factor Mimics”.

My second postdoctoral research project brought me to the University of Twente, The Netherlands (2008-2009), where I devised “Nanoparticle Immunosensors Using Darkfield Microscopy”.

In 2009, I received a personal research grant from the German Academic Exchange Service (DAAD) and started working on my third postdoctoral research position still at the University of Twente. My project “Multiplexed Protein Nanoarrays: Full Control over Protein Orientation, Localisation and Functionality” let me further exploit my experience in spectroscopy and biophysics and I gained new insight in surface functionalization.

The current project is my fourth postdoctoral research position (since 2012) and the third one at the University of Twente. My research topic here is the “Design and Fabrication Using (Inkjet) Printing Techniques of Functional Layers for On-chip Sample Preparation for Point-of-Care Diagnostics in Resource-poor Settings” and is described in some detail below.

The part of the InstantCount project I am currently working on is the development of printing methods to reliably produce InstantCount cell counting chambers and evaluate their performance.

In the InstantCount approach samples are prepared on-chip to avoid the need for laboratory equipment or skilled personnel. Several piezoelectric picolitre droplet dispensers (single nozzle dispensers and industrial inkjet printheads) are being tested to replace the manual casting of the reagent solution and, thus, make the fabrication of reagent release layers more reliable. Printed release layers need to be optimized with regard to many parameters such as thickness, homogeneity, concentrations of staining agents and matrix material and are eventually evaluated by their specificity and sensitivity regarding their cell counting performance. Figure 1 shows images of printed layers using a single-nozzle dispenser and an industrial printhead, as well as an image of a functioning, printed cell counting chamber and the resulting plot to evaluate cell counts after data analysis. 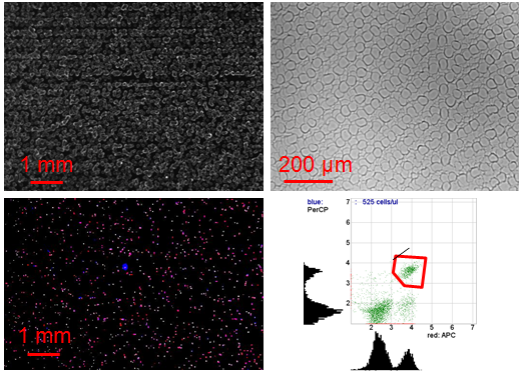 Figure 1: fluorescence image of a release layer printed using a single nozzle dispenser (top left) and bright field image of a release layer printed using an industrial inkjet printhead (rop right), as well as a fluorescence cell counting image (bottom left) and the resulting double logarithmic plot (bottom right) of the intensities of the two used stains of those cell, that were identified after image analysis. The red polygon in the plot represents the so-called gate with which a cell population is selected for counting.

The walls of the microfluidic chambers were printed using a piezo-actuated nanoliter droplet dispenser. Printed walls allow for rapid adjustments of design while still making production of batches of the order of hundreds of counting chambers feasible. Figure 2 shows the nanoliter dispenser during a printjob and a finished slide with four microfluidic counting chambers. 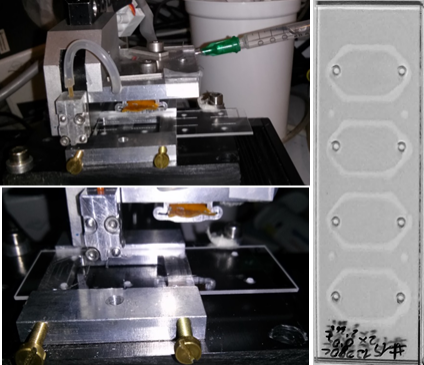 Figure 2: Photographs of the nanoliter dispenser setup (top left) and of the dispenser while printing chamber walls (bottom left), as well as an assembled slide with four fully-printed counting chambers (right).

In the near future a statistical evaluation of printed InstantCount cell counting chambers will be carried out using healthy-donor blood. Their performance in terms of sensitivity and selectivity will be tested using the so-called CD4 count (for HIV staging) as example. As reference flow cytometry data will be used and performance will be evaluated in time and under various ambient conditions.

After the successful completion of these tests, patient samples at the UMC in Utrecht (see Collaborations) will be tested.

If you are enthusiastic, love lab work, are not shy around a multidisciplinary team and feel you could contribute to this part of the InstantCount project – or any other part of InstantCount or, indeed, MCBP project, please do not hesitate to contact me or any of my colleagues.