In view of global energy and environmental issues, the necessity to utilize our global energy sources more efficiently becomes relevant. The use of thermoelectric devices offers a promising method to convert waste heat directly into energy. A thermoelectric device combines p- and n-type thermoelectric materials, which develop an electrical potential when a temperature gradient is applied (figure 1). The efficiency of these devices is determined by the properties of the thermoelectric materials and can be increased by maximizing the Seebeck coefficient and the electrical conductivity or by minimizing the thermal conductivity. 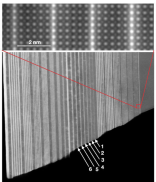 Figure 2 TEM image of a superlattice structure grown by PLD. Multiple sequences of 5 and 1 monolayers of respectively SrTiO3 and LaTiO3 were grown, resulting in the superlattice as shown. The inset shows a magnification of part of the superlattice, where the Strontium and Lanthanum atoms can be identified by respectively dark and light circles.A. Ohtomo et a., Nature 419, 378-380 (2002)

We are currently working on the fabrication and analysis of thin films and superlattice structures of oxide thermoelectric materials. Thin films are fabricated by pulsed laser deposition (PLD), which provides a precise control of structure, composition and thickness of the layers (an example is shown in figure 2).

We are looking for motivated students who have a background in physics, chemistry, materials science or nanotechnology. Several assignments are possible within this project. An example would be to study the influence of epitaxial strain in thin films on the thermoelectric properties. This assignment would involve the growth and structural/thermoelectric characterization of thin films on different substrates. Other assignments are also possible, for more information contact Mark Huijben (m.huijben@utwente.nl).