Liquid-vapor phase transition or boiling heat transfer is a classical, yet actively pursued heat transfer topic. Most advances are made in surface texturing using organic molecules to modify wetting characteristics with the liquid. However, these modifications have little or no impact with cryogenic liquids because organic compounds freeze at low temperatures.

Our interest is to study the quenching of a material with cryogenic fluids. Several factors influence this liquid-vapor phase change transition phenomena as illustrated in the cartoon. 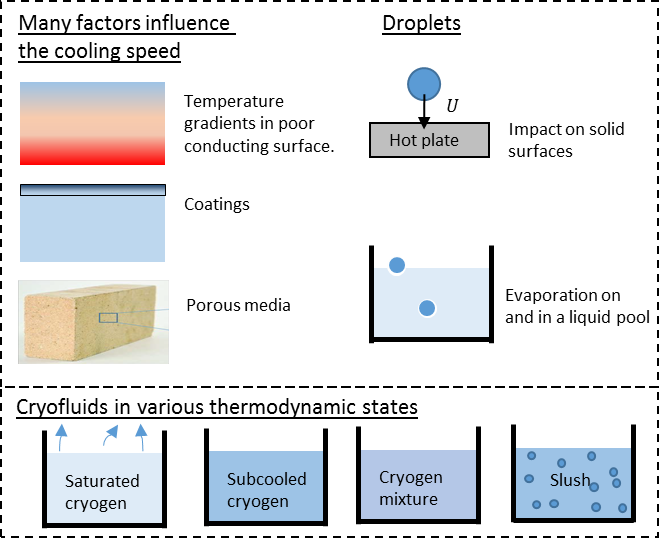 Our research on pool boiling with cryogenic liquids is triggered by a curious experiment in our lab where we recorded temperature during quenching of an aluminum and a plastic vial of about the same weight. To our surprise plastic vial cools faster in liquid nitrogen compared to an aluminum vial. There is no published literature covering this ’paradox’ phenomena, albeit its practical importance. We even improvised on these findings by applying a coating of poor conducting materials to aluminum and obtained an enhanced cooling speed.

A systematic study of the interplay between a solid’s thermal properties and the cryogenic liquid is part of the PhD work of Sahil Jagga.

Cryogenic spray cooling is used in freezing industry to transfer large amounts of energy at low temperatures through the latent heat of evaporation. Heat transfer rates much higher than can be attained in pool boiling are possible with sprays since the vapor can be removed from the surface more easily. Our first attempt to study impact of cryogenic droplet on a superheated surface appeared in a news feature in Physics World

Different types of biomedical materials must be kept in the deep frozen state during transport, such as fresh frozen human and animal tissue, cell lines, stem cells and antibodies. The transport of such materials is important if the acquisition of the materials, and the processing and/or testing of these materials takes place at different locations. This is the case, for example, in the performance of clinical studies, molecular diagnostic tests, setting up biobanks and research & development studies. Due to the increase in such activities, the demand for the refrigerated transport of biomedical samples is also increasing rapidly.

Dry-shipper is a cold packaging container that contains liquid nitrogen as a cold source. Since the liquid nitrogen is absorbed into a porous material inside the dry-shipper there is no risk of spillage during transportation and allows the container to be shipped with “non-hazardous” classification. The biggest challenge is that the hold time differs from one dry shipper unit to the other. In this project, we will develop a fundamental understanding of the process involving cryogenic fluids constrained in a porous material. A combination of experimental techniques including high-speed imaging, imbibition tests in cryogenic environment and theoretical models will be developed.