“…Exploration of the possibilities and limitations of the acousto-optic method; development of instrument prototype for quantization of chemical components...” 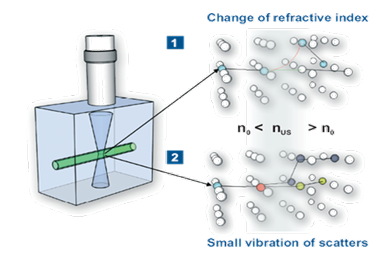 Photons travel through a turbid media on a random paths, thus it is not possible to specify neither pathlength nor location of the path in a media. However, it is possible to overcome this issue by combining acoustics and light. Ultrasound (US) scatters in tissue much less than light, so we can use it for the localization in the tissue. A small ultrasound burst of 1µs in length is illuminated with a 1µs LASER pulse. During this 1µs illumination time, the US package is almost stationary in the tissue, and modulates photons travelling through this US pressure field. From the all the light that travels through the whole sample only a small part is modulated by the ultrasound. The modulation takes place by 1: the change of refractive index caused by compression of the ultrasound pressure (Raman-Nath effect) and 2: the scatter particles are slightly vibrating with the US frequency changing the optical path. Where scattering on the vibrating particles causes a Doppler shift with the US frequency. Concluding, the ultrasound changes the optical path, and frequency modulated the light, this small fraction of modulated light posses’ information of local fluence, because the bulk non-modulated light is ignored. Measurement of local absorption is done by measuring the modulated photon intensity which travelled through the AO tagged volume. No absorption causes full fluence to pass the ultrasound volume and maximum AO tagged intensity is measured. When absorption increases, local fluence dropped, and from the AO tagged volume less fluence is exiting the AO tagged volume, dropping the modulated intensity. 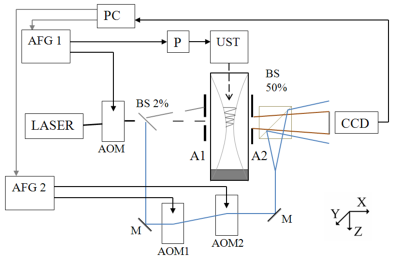 Figure 2: Schematics of the acousto-optical setup in transmission geometry.

The all over light intensity that acousto-optically is tagged is very low (photon counting level). Where optimal detection is preferable to detect this low number of photons, simply increasing exposure time of the camera is not possible due to the Brownian motion of the tissue. This randomizing of the phase allows a max exposure time in the order < 10ms. For this reason it’s necessary to detect AO tagged photos most efficient. The AO tagged fluence from aperture A2 is low and the CCD cameras digitizer noise influences the measured AO tagged intensity. To eliminate the CCD camera noise’s influence, heterodyne amplification is used as optical amplification of the AO tagged intensity from the aperture A2 with the much stronger reference wave.

Here is ICCD the intensity measured at a CCD pixel, where the sum of IS (sample fluence) + IRef (reference fluence) is partly measured as a DC intensity. However

is recorded as a stationary interference pattern, due to the lock-in into the US Doppler shifted photons, where IS is amplified by IRef helping to increase to interference patter out amplitude well above CCD digitizing units and readout noise. The signal to noise level is now mainly determined by the shot noise of the fluence from the sample.

For measuring the Acousto-Optical tagged intensity, we measure the intensity increase on the bright square when ultrasound power increase intensity in the square also increases. For sufficient resolution we use ultrasound burst of 1µs in length. Local light fluence is measured, by initiating an ultrasound burst that travels along the acoustical axe and illuminates the phantom with a 1µs pulse with a certain delay time referred to the initial US burst. By recording a series of interference patter, with different delay times of the laser, we could probe local light fluence along the axial axe. Plotting the intensity of the aperture in function of ultrasound position in mm. (Figure 4), Maximum sensitivity is set 22.5mm, which is the focus position of the transducer. 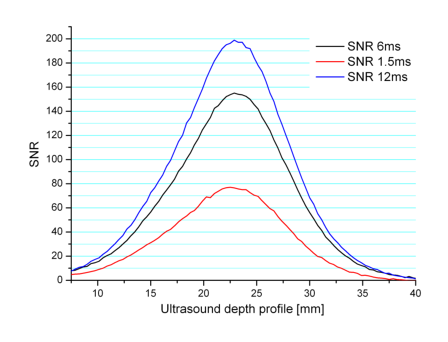 Figure 4: Example of a typical AO tagged signal along the axial axe, represented as SNR, note that the SNR is determined by exposure time, and thus shot noise limited.

It is possible to make an axial scan in depth, we expand the system with a lateral XY scan, imaging of hidden absorbers. 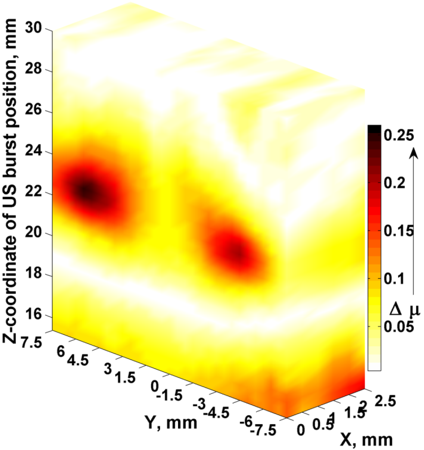