Lecturers often use the chalkboard to do calculations and explain derivations during lectures. This is completely natural to them and also to the students. But there are some drawbacks associated with this common practice. First of all it is quite probable that another class will occupy the designated lecture hall before the Math lecture. Therefore preparing a chalkboard before a lecture is often logistically not really possible. And during the lecture itself in the lecture hall, the professor must be very aware of the readability of the handwriting. And thirdly the lecturer will be standing with his back to the students while writing. So really staying in touch with the students in the lecture hall is not easy. 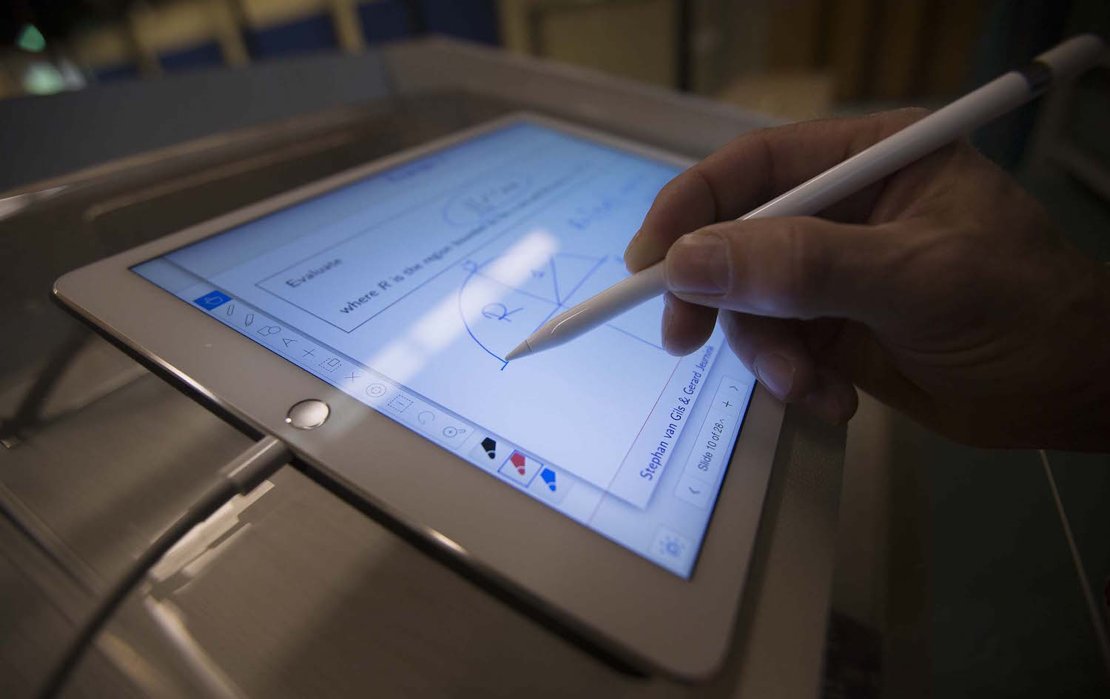 What did the TELT team do?

The TELT team explored and tested different applications based on the requirements and advised to use the application Explain Everything (EE). We acquired a full license for this application for a one year period (please contact us in case you also want to use this license). Furthermore we tested different connection types between the iPad and the beamer. For now we came to the conclusion that using a wired connection would be best.

How did it go?

There are a few separate steps that can be distinguished. First Van Gils prepared his lecture slides. This can be done on any device or on the the iPad Pro itself. Those slides can then be imported (in this case in PDF format) into Explain Everything on the iPad before the actual lecture. The import feature of EE is quite extensive. Files can be imported from different  sources, such as Google Drive, Microsoft OneDrive, and Dropbox. But they can also be imported from SURFdrive, which is what Van Gils used.

The slides were actually not the regular slides as used in previous runs of the course. They were specifically prepared for this purpose with quite some white space.

During the lectures Van Gils wrote formulas, explanations and other important information on the white space on the slide. This was a very natural process for Van Gils, very much like teaching and explaining using a chalkboard.

The use of Explain Everything is experienced by Van Gils as very positive. These are the main positive points:

We have received quite a positive response from the students. They liked the lectures and the fact that the professor is using modern technology to their advantage.