A Look Back at 2018 Edition of PHTR Conference

Our first edition of the PHTR Conference was such a success that we of course wanted to host it again. Here is a look back at 2018: 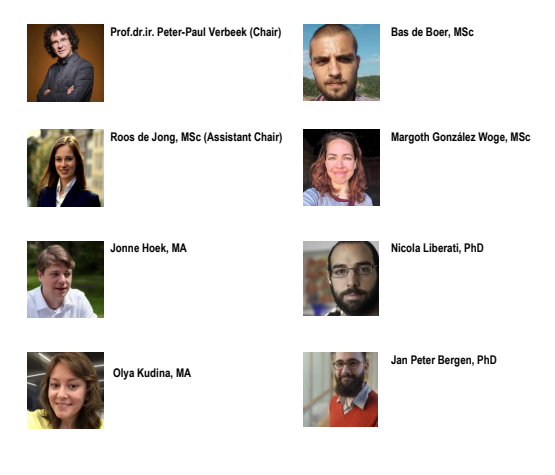 We were also very grateful to the students from the PSTS master programme:

There was a great mix of speakers from various backgrounds that were able to provide us insight in their fields related to Humans and Technology:

Shannon Vallor is the William J. Rewak, S.J. Professor in the Department of Philosophy at Santa Clara University in Silicon Valley, and a member of the executive leadership team of the Foundation for Responsible Robotics. Her research explores the philosophy and ethics of emerging science and technologies. (Read more on her personal website)

Humanizing Machines: AI and the Mediation of Human Self-Cultivation

Description: The spread of commercially viable artificial intelligence brings dizzying consequences for every sociotechnical system, from finance and transportation to healthcare and warfare. Less often discussed is the growing impact of AI on human practices of self-cultivation, those critical to the development of intellectual and moral virtues. Today, AI is weaponized in Trojan-horse attacks aimed at the root of our democratic virtues; designed to surreptitiously enter, mediate and gradually subvert the practices of public discourse by which civic virtues of trust, solidarity, charity, honesty, and justice are built and sustained. Through games and social media, AI is also being weaponized against our persons, to stall from an early age the cultivation of the virtues of patience, self-control, and intellectual and moral discernment. Yet while AI mediation can impede or denature self-cultivation practices, it also has the potential to amplify and sustain them. Humanizing AI design could provide reliable mirrors and feedback channels that foster more honest self- appraisals of our character. It could mediate newly creative practices of moral and intellectual modeling and imagination. It could reinforce more sustainable moral and intellectual habits. It could detect, signal, and perhaps even mediate fraying civic and personal relations. This talk posed the questions: is a world with humanizing machines possible? Desirable? If so, how could we build it?

Yvonne Dröge Wendel is a Dutch visual artist and head of the department of Fine Arts at the Gerrit Rietveld Academie. She was currently working on a PhD artistic research project at the University of Twente in which she examines the relational and performative abilities of things, a theme that touches on present-day questions about our relationship to the (technological) world around us. (Read more: personal website)

Since 2012 Yvonne Dröge Wendel works on the design of her DenkTank, literally a Think Tank. A large steel object, a building where individuals can consult objects about themselves. Her aim is to create a place that helps to formulate the essential questions when it comes to the future of things. This talk will discussed outcomes of the artistic research based on images of a recent video work: The honorable members, 2017.

Andrew Feenberg is Canada Research Chair in Philosophy of Technology in the School of Communication, Simon Fraser University, where he directs the Applied Communication and Technology Lab. His work focuses on Critical theory and philosophy of technology. (Read more: personal website)

The Intersection of Causality and Meaning

Design lies at the intersection of causality and meaning. It can be studied in objectivistic terms,for example, with regard to the various technical relations and social influences it involves. It can also be studied phenomenologically, from the standpoint of the subjective dispositions and corresponding meanings engaged in the design process. The instrumentalization theory is a phenomenology of technological design. It describes the general structure of a technical mentality that identifies causal relations and shows how that mentality is imbricated with cultural values and meanings. The theory incorporates Insights from both traditional philosophy of technology and contemporary STS.

Rosi Braidotti is distinguished university professor and founding director of the Centre for the Humanities at Utrecht University. Her publications have consistently been placed in continental philosophy, at the intersection with social and political theory, cultural politics, gender, feminist theory and ethnicity studies. (Read more: personal website).

The Posthuman and the Critical Posthumanities

The era known as the Anthropocene, caught between the Fourth Industrial revolution and the Sixth Extinction, confronts us with paradoxes that require new ways of thinking. Crucial to the development of posthuman critical thought is the determination not to forego the analysis of enduring patterns of oppression, exclusion and structural economic  inequalities. I raised a few critical questions about the notion of the Anthropocene itself. How useful is it? How inclusive and how representative? This idea has already spawned several alternative terms, such as “Capitalocene”, “Anthrop-obscene”, but also: Plastic-ene and ‘Mis-anthropocene’. My argument is that several alternative visions are emerging from the implosion of the category of the ‘human’ and the explosion of multiple  forms of inhuman, nonhuman and posthuman subject positions. Such diversification is both quantitative and qualitative: it expresses geo-political and socio-economic differences while sustaining common concerns in a post-anthropocentric world order.

Vanessa Evers is a full professor of social robotics at the University of Twente. Her research focuses on human interaction with autonomous agents such as robots or machine learning systems and cultural aspects of human computer interaction. (Read more: personal website)

Description: The classic image for people working with robots is that of a person who is focused and eager to learn how to work with or control a robot. The job of the roboticist then is primarily to avoid mistakes in accuracy of detection, manipulation, navigation, decision making, planning and so on to optimize human robot collaboration. In the talk I argued that social norms embedded in people, robots and the context in which the robots are used make this approach obsolete. Specifically, I addressed the following questions:

Through examples of practical deployment of interactive robots, I explored the fundamental social relationship people have with autonomous robots and offer essential rules and opportunities for effective human-robot collaboration.

Don Ihde is a philosopher of science and technology, and a post-phenomenologist. In 1979 he wrote what is often identified as the first North American work on philosophy of technology, Technics and Praxis. Ihde is Distinguished Professor of Philosophy at the State University of New York at Stony Brook.

The number of people sending in abstracts and registering to participate was much larger than we had dared to expect, which made it a true pleasure to organise the conference. While focusing on the philosophy of human technology relations, the conference reached out to art, design, engineering, and Science and Technology Studies. In total we were able to create over 50 different panels for participants to attend. We had paper presentations, demonstrations, hands-on workshops, book panels, and a book exhibit. Participants came from all over the world, we believed the conference brought about many new connections and we cannot wait to see what the 2nd edition of the PHTR Conference will bring.

Here is just a sample of what was offered in 2018:

In this workshop, we brought together researchers and practitioners from a range of areas including philosophy, art, and computer science to discuss and exchange ideas on how to shape intimate technologies that can contribute to human flourishing. Specifically, the workshop will focus on the effects on our vulnerability through the use of digital technologies following three main relations between users and technologies.

This book forwards a concept of ‘exceptional technologies’ for work in philosophy of technology and related fields. By ‘exceptional technologies’, I mean artefacts and practices that appear as marginal or paradoxical according to a received sense of what constitutes a ‘technology’ in a given context, but that can act as important focal points for drawing out and challenging conditions implicated in the received sense.

Workshop: What Internet of Things Do - Implications of a ‘Do It Yourself’ Programmable World

During this hands-on workshop we provided participants with a brief glimpse into IoT-enabled Smart Environments. By focusing on healthcare scenarios, we explored how IoT technologies pose a myriad of implications as they go mainstream by becoming affordable and easy to use.

The paper will argue that it is time for the discipline of architecture to awaken from the slumber of anthropo-centrism and shake off the baggage of nature/nurture dichotomies. It will propose that we drop anthropomorphism for geomorphism and reconfigure ethology so as to become a theory of capacity.

Workshop: What does Postphenomenology mean for the role of the bioethicist

In this workshop, Annelien Bredenoord showed that post-phenomenological thought all but renders ethics superfluous. Rather than being an external judge of the moral good of a technology as such, bioethicists can engage in ethics parallel research. In ethics parallel research, ethicists identify and evaluate the ethical and societal issues of a novel technological or biomedical intervention ‘from the inside’.

The Conference Program including Abstracts:

On the evening of July 12th the conference dinner was held in the museum De Museumfabriek, close to the old city centre of Enschede. The museum is located in a renovated textile factory, representing Enschede's textile industry history, in between some of the most iconic buildings in the Twente region.

Peter-Paul Verbeek co-organized the exhibition Frankenstein: I think therefore I am which was showed in this museum. Participants of the dinner could enter the exhibition for free during this evening, and a guided tour was given for those interested.

Thanks to all of those who made the first edition of the PHTR Conference a success! We hope to welcome you to the PHTR 2020 Conference.