On Thursday 9 and Friday 10 November 2017, the Netherlands Institute of Government (NIG) held its Annual Work Conference, in Maastricht. The conference was organised in collaboration with the Maastricht University, Faculty of Arts and Social Sciences - Department of Political Science.

Before the NIG conference an interactive debate 'Beyond rigour: increasing the public relevance of political science and public administration' of the Vereniging van Bestuurskunde took place. The interactive debate started with the launch of the new book Toekomst van de bestuurskunde (edited by Karré, Schillemans, Van der Steen, and Van der Wal). 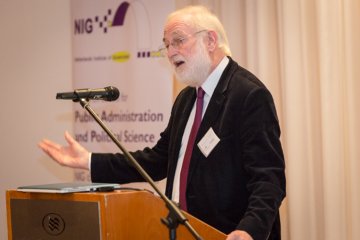 The keynote speech "What sense can we make of Brexit?" was given by Professor Michael Shackleton (Special Professor in European Institutions, University of Maastricht) – Short summary

During the conference the following awards were presented:

We appreciate your feedback and kindly ask participants to fill in this survey.