These polymer coatings were prepared via layer-by-layer assembly, carefully controlling thickness and internal properties. ‘Characterization of each step is important,’ says Shazia. ‘Coating conditions such as pH and ionic strength are crucial, as the layers are very thin, in the order of nanometers.’

‘Here an extra advantage of weak PEM comes into play,’ Shazia explains. ‘The layers may act as antifouling layers as well. Cleaning of fouled membranes is easier as sacrificial removal is possible by using triggers such as: salt, pH and surfactants. After cleaning the clean membrane can be recoated and reused. So: weak PE multilayers can combine various functionalities in UF and NF membranes, making them very attractive in a wide range of future applications.’ 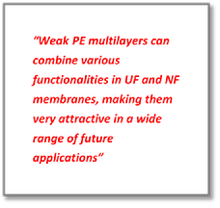 ‘The starting point of my PhD project initially was focused on novel anti-fouling and easy-to-clean strategies,’ Shazia tells. ‘During the project other functionalities came across. Being able to combine these – and tuning the properties on these new features carefully - that’s when the happy times of my PhD started, really focusing on novel membrane technologies.’ 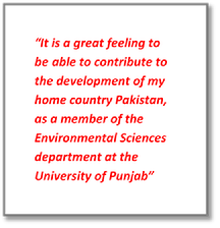 During the project Shazia learned many new techniques. For her, membrane science was a new field of research, being a master in environmental engineering.

‘For example characterization techniques were totally new to me,’ she says. ‘Optical reflectometry was one of them. Building membrane modules myself, and then testing them, also was. I liked these kind of challenges during my PhD project very much really.’

The work of Shazia was part of the Erasmus Mundus Doctorate program. As a consequence she spent her time working in three different universities: the University of Twente, KU Leuven and Universitiy of Toulouse. 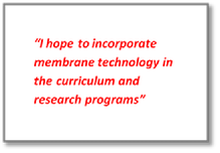 In Leuven she collaborated with the Centre for Surface Chemistry and Catalysis (COK) Group, focusing on solvent resistant nanofiltration membranes. In Toulouse the experts on process engineering from Laboratoire de Génie Chimique (LGC) brought her work further on some decisive matters. ‘From the PhD research some nice publications resulted,’ Shazia says. ‘For example, I was an author in Journal of Colloid and Interface Science as well as in Journal of Membrane Science.’ 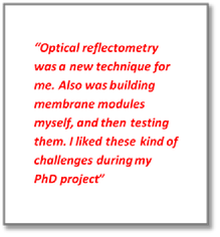 ‘I started in Twente and returned here,’ she says. ‘Right from the beginning it felt like home to me. I collaborated closely with the Materials Science and Technology of Polymers Group, for example. Also using their plasma cleaner I valued greatly. Specialized equipment I used to clean the wafers before processing them and to characterize the cleaning of the membrane modules in the anti-fouling proceedings we studied. Working within the Membrane Science and Technology (MST) group, in close collaboration with Professor Erik Roesink and Wiebe de Vos, was never-to-be-forgotten.’ 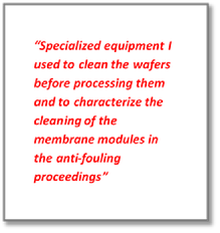 After her PhD Shazia will return to her home country Pakistan. She will be working as an assistant professor in Environmental Sciences.

‘It is a great feeling to be able to contribute to the development of my home country, as a member of this department at the University of Punjab,’ she says. ‘I hope to incorporate membrane technology in the curriculum and research programs. That would be a great contribution to the higher education level in Pakistan.’