In this thesis special emphasis was given to the hybrid forward osmosis/membrane distillation (FO-MD) processes as the most suitable solution for the treatment of produced water: this is the water co-produced with oil extraction.

‘This question is quite challenging, especially in the South of Iraq, due to its ultrahigh salinity,’ Mustafa Al-Furaiji says. ‘Especially now oil production is rising again, water deficits endanger land agriculture in those regions, as most of the produced water is injected into the ground.’

Triple-layer nanofibrous membranes were prepared in this project and tested in direct contact membrane distillation with high salinity feeds.

‘The integrated FO/MD processes proved an effective means of treating water with high salinity,’ Mustafa is happy to say. ‘It is feasible to treat waste streams up to 240.000 parts per million. The treated water can be used in applications such as: irrigation, injections to enhance oil recovery, and even as drinking water.’ 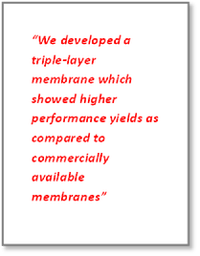 In the beginning of the PhD project the water deficit in affected Iraqi regions, the southern four provinces, was calculated. After this, two draw-solutions were investigated in the treatment of hyper-saline produced water: one thermolytic based and one electrolyte based. MgCl2 was chosen as a good candidate.

In a second step different commercial membranes were studied in membrane distillation, all showing high salt rejections. ‘After that we developed a triple-layer membrane ourselves,’ Mustafa says. ‘It showed higher performance yields as compared to commercially available PVDF (Polyvinylidene fluoride, or polyvinylidene difluoride) membrane candidates.’ 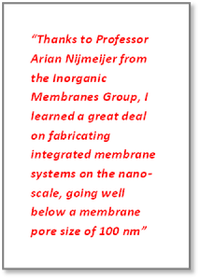 In this project Mustafa spent two years at the University of Connecticut working with his co-promotor, Professor Jeffrey McCutcheon (department Chemical and Biomolecular Engineering). He is an expert on membrane separations focussing on desalination technologies like forward osmosis.

‘I really appreciated the support and freedom of research I was offered on studying this specialized field in America,’ Mustafa says. ‘In Holland, at Mesa+, I learned to work according to a specific plan, designing experiments carefully and making good use of the time available. Thanks to Professor Arian Nijmeijer, from the Inorganic Membranes Group, I learned a great deal on fabricating integrated membrane systems on the nano-scale, going well below a membrane pore size of 100 nm.’

The characterization methods he learned at Mesa+ will be of major importance in his future job, Mustafa reckons. After his Defense he is planning to return to his native country in Iraq, to work for the Ministry of Science and Technology. 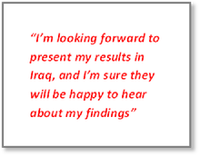 Mustafa: ‘My PhD was funded by the Iraq government. I’m looking forward to present my results, and I’m sure they will be happy to hear about my findings. The PhD research is taken further. In Connecticut a small pilot plant is being build, to scale up this technology. In November the work on this will start. I am very curious as to how this hybrid treatment for produced water, turns out when fluxes and feeds are substantially higher than the ones I studied in the laboratory.’