‘In this thesis work 3D environments – shaped as inverted pyramids - were fabricated for in-vitro electrophysiology and made available for conventional microelectrode arrays. A reliable platform was realized by combining micro fabrication and micro-fluidics towards a 3D “brain-on-chip”, allowing for drug discovery and study on diseases.

‘The goal was to mimic in-vivo single-cell phenomena taking place within the brain more closely,’ says Bart Schurink. ‘In the here created 3D environments the physiological situation is far more relevant as compared to the environment in a petri dish.’

3D micro-sized culture environments were created, using the design of a silicon sieving structure. This structure consists of numerous anisotropic etched pyramidal shaped pores, to actually enable positioning and culturing of cells. On top of this, a novel hybrid micro bioreactor has been developed, which can be used as an add-on device, to allow for 3D culturing of networks.

‘It is important to create suitable 3D environments for cultured neuronal single cells at both the electrodes and the network on top,’ says Bart. ‘By doing so we are able to monitor their growing processes and their electrical activity.’

Eventually a novel device was invented: the micro-sieve electrode array (µSEA). Here, multiple electrodes were integrated within the 3D pores of the sieving structure, to realize an advanced microelectrode array (MEA). Single cells could be positioned into the 3D environments, and thus on the microelectrodes, by a “sieve-flow” using a cell solution. At the end of the thesis project, the first step towards a brain-on-chip was achieved: to engineer a platform, to allow for single cell and extracellular recordings in a 3D neuronal network.

For the fabrication of the microsieve electrode array device alone, a total of more than two hundred process steps are involved, including various fabrication techniques and skills. Two decisive moments Bart Schurink recalls looking back on his multifarious PhD research work, in which he has spent considerable hours in the Nanolab. 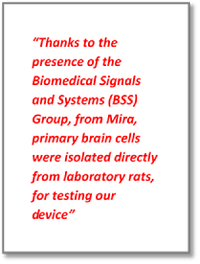 Bart: ‘The cell-positioning sieve contains 900 well-defined openings distributed in a 2x2 mm circular area on a conventional 4” silicon wafer. For fabrication a creative procedure was required. We used challenging techniques currently available, and designed new ones.’ 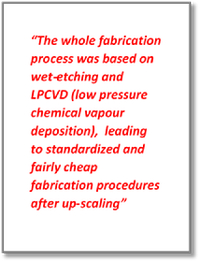 Bart stresses the creative input from the experienced technicians of the Mesoscale Chemical Systems (MCS) Group.

‘By applying the work of Erwin Berenschot, the so-called corner lithography was introduced,’ says Bart. ‘The idea arose to add octagonal structures – to be sacrificed later – onto the membrane sieve structure, to correct for etch non-uniformities. This appeared to be the key towards creating the much needed uniform pores and pore openings. The whole fabrication process was based on wet-etching and LPCVD (low pressure chemical vapour deposition), leading to standardized and fairly cheap fabrication procedures after up-scaling.’

Bart: ‘Without the expertise and experience of the MCS technicians, colleagues and MESA+ staff members, the final µSEA would have been unfeasible. Also the presence of the Biomedical Signals and Systems (BSS) Group, from Mira, was beneficial to our research. Thanks to their technician Gerco Hassink, primary brain cells were isolated directly from laboratory rats, for testing our device’ 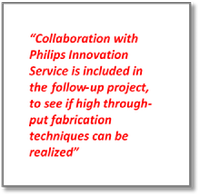 The work of Bart will be continued in an ERC grant project by his co-promotor dr. Regina Luttge, now an associate professor at the department of Mechanical Engineering at the Technical University in Eindhoven.

‘My PhD project was financially made possible by Regina Luttge’s European Research Council (ERC) starter grant,’ Bart says. ‘I am happy the next ERC grant can support a continuation of this promising project. 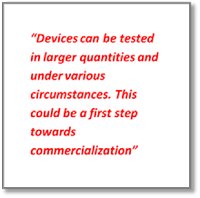 Collaboration with Philips Innovation Service is included in this follow-up project, to see if high through-put fabrication techniques can be realized. Then devices can be tested in larger quantities and under various circumstances. This could be a first step towards commercialization.’

Bart has acquired advanced knowledge in the field of micro and nano fabrication techniques, in addition to his primary education in biomedical engineering.

Bart: ‘The real challenge is to combine fabrication techniques and biomedical engineering processes. In my future job I hope to contribute in a creative manner to further integrate these areas of research, be it as a post-doc at the University of Twente or at a (start-up) company. Several are set up in the Netherlands at this present time on this topic, predominately in the western and southern parts of the country but also beginning to pop up here in Twente.’