The aim of this thesis was to obtain further insight into the transport phenomena near slippery and/or heterogeneous interfaces.

‘Wall slip can be utilized to increase advection in the direct vicinity of a wall,’ Sander Haase says. ’As it clearly affects the rate of transport at larger scales, slippery surfaces do have some potential applications. Fundamental investigations of these micro- and nanoscale transport phenomena are therefore of high importance.’

Three main topics can be distinguished in this work. The first chapters describe the flow over a bubble mattress, which is a superhydrophobic surface. It consists of an array of solid ridges and slippery bubbles positioned perpendicular to the flow direction. ‘The amount of wall slip depends on the curvature of the gas-liquid interface,’ Sander says. ‘Remarkably, wall slip is maximized for a slightly bumpy bubble mattress. For a long time I have been looking for an explanation f or this phenomenon. After a relaxing sport event, I suddenly had a clear insight from which I was finally able to work out the main calculations. Two opposing effects explain why effective wall slip is maximized.’

The other two topics include slip flow over superhydrophobic surfaces that are characterized by a pattern of no-slip and no-shear regions (describing heat and mass transfer near these surfaces), and ion transport near heterogeneous charge-selective interfaces in a microfluidic desalination device. 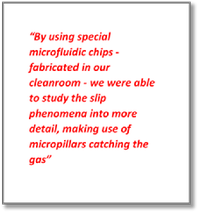 Sander Haase describes his work as fundamental in nature. Studying slippery surfaces, as he performed in his first chapters, is quite a young area of research.

‘Since 2000 this topic is addressed, mainly using various numerical and analytical techniques,’ he says. ‘Experimental validation remained difficult. By using special microfluidic chips - fabricated in our cleanroom - we were able to study the slip phenomena into more detail, making use of micropillars catching the gas. In this way we could create well-defined slip conditions.’ 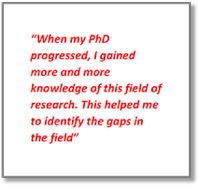 Sander: ‘When my PhD progressed, I gained more and more knowledge in this field of research. This helped me to identify the gaps in this field. The route described in chapter four is a nice example of that. Here we could predict the slip enhancement for non-Newtonian liquids - following from our simulation results – by deriving a theoretical limit.’

By extending the classical Graetz-Nusselt problem, to investigate the relationship between hydrodynamic slip and interfacial transport, Sander put himself in a scientific tradition.

‘The first publications on this topic stem from the 1880’s already,’ he says. ‘In my research we changed the velocity profiles by increasing the amount of slip. At the end, the velocity in thermal/mass boundary layers determine the rate of transport. Finding a new mathematical solution for this classical problem, valid for each slip length value, was very rewarding. In an article in the Journal of Fluid Mechanics, we showed that our equation also encompasses the classical solutions found one century ago.’ 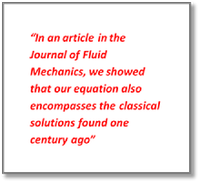 In the concluding chapter, Sander described the development of a microfluidic electrodialysis platform, containing a stack of alternating positively and negatively charged hydrogels.

‘It allows visualization of ion transport inside hydrogels,’ Sander says. ‘The platform can contribute to better understanding the transport phenomena that are related to electrodialysis. I got the idea for this project when Burcu Gümüşcü gave a talk about hydrogel microarrays during a Soft Matter colloquium. Together with her and Anne Benneker, we were able to design and fabricate a microfluidic electrodialysis device using hydrogels. So we got through the process from idea to working device.’ 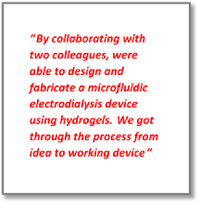 Sander gave some good thoughts as to his job after his PhD. He considered a job in academics as well as a job in higher education, as he very much liked teaching students about ‘transport phenomena’. When he came across a vacancy for a researcher process technology at AkzoNobel in Deventer, he was making up his mind quickly.

Sander: ‘This was a good opportunity for the nearby future, to work for this well-known company on topics I am quite familiar with. During my PhD I learned to perform projects as an independent researcher, facing the subjects of research in a thorough manner. Doing a PhD is a good closure of the academic training program.’