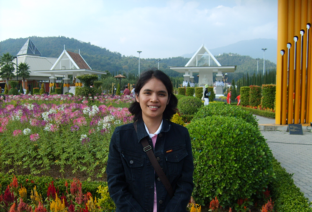 Anida Petchkaew was born in Narathiwat (Thailand) on October 11th, 1977. She studied Polymer Science at Prince of Songkla University, Thailand and received Bsc. degree in 2000, and then she went forward in the master program at the same university in 2003. The topic of her thesis was:

In May 2009, she joined the Rubber Technology program as a PhD student on the topic of “Implication of PNA-free Aromatic/Naphthenic Extender oil in NR-based Tire Treads”.

Tire compounds are composed of various ingredients such as carbon black, accelerators, activators, antidegradants, sulfur and process oil. The oils are generally added in the compounds to improve processing properties, low temperature properties, dispersion of fillers, and to reduce cost. The conventionally widely used oils in tire compounds are Highly Aromatic (HA) oils, which contain a high concentration of Polycyclic Aromatic Hydrocarbons (PAHs). PAHs that can be released from tires by tire wear are harmful to health and environment, so safe process oils are needed to replace aromatic oil in tire compounds. This thesis comparatively studies the influences of PAH-free petroleum based extender oils, i.e. Treated Distillate Aromatic Extract (TDAE) and Mild Extracted Solvate (MES), versus the conventional aromatic oil on the properties of NR-based truck tire tread compounds and NR/SBR-based passenger tire tread compounds. Oil characterization data are analyzed, and the influence of the oils on the properties of unfilled compounds is also elucidated.