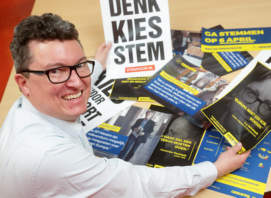 Martin Rosema is assistant professor of political science at the University of Twente. His main tasks are in education (80 per cent): he teaches several courses about political science, governance, democratic legitimacy, and European politics in the bachelor and master programmes in Public Administration (including MS&T) and European Studies, while also lecturing about research methods in the pre-master programme in Psychology. Furthermore, he teaches a university-wide minor about the governance of student organisations. In his research, Martin currently focuses on themes like digital democracy (especially decision support systems, like voting advice applications), algorithmic governance, and the use of modern technology (e.g. brainimaging, virtual reality) to study emotions, political attitudes and behavioural change. He is associate editor of the open access journal Frontiers in Political Science and a member of the Examination Board Governance Sciences. For more information about his past activities, please refer to his biography and research project pages below.

The research projects of Martin Rosema focus on four topics, which are all related to voting behaviour. More information about his work on these topics, including overviews of academic publications as well as articles aimed at the general public, can be found via the following links:

Martin Rosema was born in 1970 in Hengelo, only 6 km away from his current office on the campus of the University of Twente. But he took a bit of a detour to get there.

At the age of 12, he left the region of Twente and moved with his parents and sister to Maastricht. After completing high school, he shortly tasted the life of an accountant at KPMG and that of a sergeant in the army. The government at that moment abolished compulsory military service (an example of correlation, not causation, Martin wishes to emphasize). He learned how to fire bullets and grenades, as well as to drink beer. The latter proved more useful for his later life than the former.

When he noticed that neither position made him happy, Martin decided to go to university. He opted for the one most conveniently located between the three Dutch cities that hosted most of his favourite pop concerts and thus ended up at Leiden University. As subject he chose political science, simply because he found it very interesting. He specialised in empirical political science and did a minor in social psychology. Perhaps an interesting fact in light of his later career: his two lowest grades were for the courses on political psychology and research methods.

In those days students received a government allowance for five years at maximum and one week before this term ended he completed his master degree (an example of causation, Martin is willing to admit). The thesis was about psychological explanations of voting behaviour. He got the taste for doing research and, encouraged by his supervisors Galen Irwin and Joop van Holsteyn, soon after started a Ph.D. project on the same topic in Leiden. He interrupted this period to go to the University of Cambridge to follow a master programme in social and developmental psychology, in order to learn better how the mind works. He also learned how to punt a boat and how to cook a full English breakfast.

When his Ph.D. thesis was close to being finished, Martin applied in Twente for a four-year position as assistant professor of political science in Jacques Thomassen’s group. To his delight, they hired him and a few years later changed it into a permanent position. So almost 20 years after leaving the region as a kid at primary school, he returned to Twente as lecturer at university.

Since joining the University of Twente in 2001, Martin has developed and taught about 30 different courses at bachelor and master level covering a broad range of topics in the fields of political science, governance studies, and research methods. Students have nominated him multiple times for the best teacher award (but he, deservedly, always ended behind the same colleague). He spent short periods as guest lecturer at University College Utrecht (2006) and Radboud University (2019).

In his research, the topics of elections and referendums have been central, with a particular focus on the psychology of voting. He published on topics such as voter decision making, party attachments, voting advice applications, electoral turnout, strategic voting, and local and national referendums. Other recurring themes in his past research are political psychology and the quality of representation. His current research includes projects on digital democracy (especially decision support systems, like voting advice applications), algorithmic governance, and the use of brainimaging technology to study emotions, political attitudes and behavioural change.

Martin has frequently been consulted by media, national and local governments, and various other organisations. Furthermore, he has held several board and editorial positions: he was co-editor of the academic journals Res Publica (2007-2010) and Political Psychology (2015-2018), co-director of the Dutch Parliamentary Election Study (2006), and member of the governing council of the International Society of Political Psychology (2008-2011) and the governing board of the Dutch Political Science Association (2009-2015). At present, he is associate editor of the open access journal Frontiers in Political Science (section: Elections and Representation). In his free time Martin enjoys listening to music, visiting modern art museums, and attending political science conferences.

- Web and newspaper articles (in Dutch)